Marian Sophie Mees, daughter of Herbert and Sophie (Kietzer) Mees, was born March 11, 1930, in Pleasant Mound Township, Willow Creek. She passed away at the Good Samaritan Society in Albert Lea on July 29, 2012. She was 82 years old. 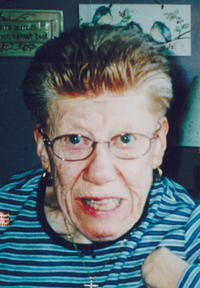 In 1934 she moved to a farm in the Dexter area where she grew up. She was confirmed at Trinity Lutheran Church in February 1955 by the Rev. Norman Sauer. She was a lifelong member of the congregation and active in the Ladies Group.

In 1979 after the passing of her father, Marian and her mother moved to Elkton where she lived until moving to the Good Samaritan Society in Albert Lea in 1994. Marian enjoyed being able to clean house, mow the lawn, do ‘paint-by-number’ with her feet and work in the garden. She learned to write with her feet, and later loved typing on her electric typewriter, also using her feet. She wrote many letters to friends and relatives. She was able to learn to read with the help of a tutor when she was an adult. She loved to read. Church was very important to Marian.  She was also a big Twins fan.

Survivors include one brother, Elvern (Beverly) Mees of Elkton; one sister, Vallene (Gerald) Knutson of Albert Lea; several nephews, nieces, great-nephews, great-nieces, and many friends. She was preceded in death by her parents, Herbert and Sophie Mees; a brother Wayne Mees; and infant sister Donna Mees.

Funeral services will be at 11 a.m. Wednesday at Trinity Evangelical Lutheran Church in Dexter, with the Rev. David Fleischmann officiating. Friends may call at the church one hour prior to the service. Interment will be in the church cemetery. Worlein Funeral Home of Austin is assisting the family with arrangements. Condolences may be expressed to the family online at www.worlein.com.