Marjorie S. Bickle, 86, of Minneapolis, died July 23, 2012, at her home in McKenna Crossing Senior Living Community, where she has resided since 2011. She passed away peacefully surrounded by her family. Marjorie had been battling pancreatic cancer for several months prior to her passing. 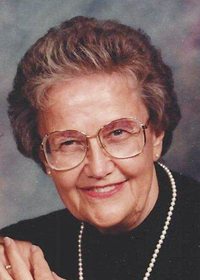 Marjorie was born April 3, 1926, in Miles City, Mont., the eldest child of Ellsworth C. (Tim) and Sarah Gosselin Viall. She spent most of her young life with her parents at Fort Keogh just outside of Miles City.

Marjorie married her high school sweetheart, Gordon L. Bickle, at the age of 18 in a romance flamed by the second world war. Following the war, the couple made their home for many years in Miles City where Gordon began his career with the First National Bank.

As Gordon’s career with First Bank Systems (now US Bank) flourished, Marjorie managed their home and raised their five children. Eventually the couple left Miles City as Gordon accepted transfer promotions. They moved to Bismarck, N.D., in 1965; La Crosse, Wis., in 1971, and Albert Lea in 1973.

Her time in Albert Lea was among Marjorie’s favorite experiences.  Gordon had been named president of the US Bank located there. As her children were getting older, Marjorie had time to sharpen her golf and bridge games and enjoyed an active social life. In addition, she was active in the community and her church, St. Theodore’s. She loved to read and was a wonderful gardener.

In 1983, Gordon was named president of the US Bank in Miles City, and the couple returned full circle back to their hometown. Again, Marjorie resumed her active lifestyle. She was a member of the Sacred Heart Catholic Church, Council of Catholic Women, Degree of Honor, the Miles City Club and the Town and Country Club to name but a few.

In 2005, with Gordon’s health in decline, Marjorie and Gordon moved to Minneapolis to be nearer their children.

Survivors include her husband of 67 years, Gordon; a daughter, Gay Lynn Klein of La Crosse, Wis.; a son, Gregory L. Bickle and his wife, Lisa of Denver; a son, Ronald E. Bickle and his wife, Vicki of Shakopee; a daughter, Barbara Ann and her husband Paul Wendorff of Eden Prairie; a son-in-law, Michael Dufner of Redwood City, Calif.; 14 grandchildren; seven great-grandchildren, and in addition, Marjorie’s uncle, George Gosselin of Gold Canyon, Ariz., and aunt, Marie Anderson of Woodland Hills, Calif. She was preceded in death by her daughter Catherine Marie. She will be greatly missed.

Mass of Christian burial will be at 11 a.m. Monday with visitation one hour prior to the service at Pax Christi Catholic Church, 12100 Pioneer Trail, Eden Prairie, MN 55347 followed by a private interment at Ft. Snelling National Cemetery in Minneapolis.