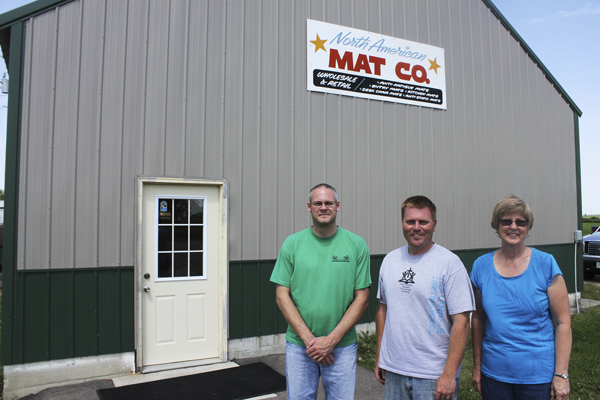 Cory Slegh, Mike Ravenhorst and Pauline Ravenhorst stand in front of North American Mat Co. in Hollandale. Pauline in January transferred ownership of the company to her son, Mike. Slegh is the sales and marketing manager. -- Tim Engstrom/Albert Lea Tribune

HOLLANDALE — North American Mat Co. has a new owner who is looking for new revenue by increasing the company’s profile in southern Minnesota.

The company already has national customers in business and industry; however, many local people might not know the company makes and sells mats for homes, too, said Mike Ravenhorst, who purchased the company from his mother, Pauline Ravenhorst, in January. 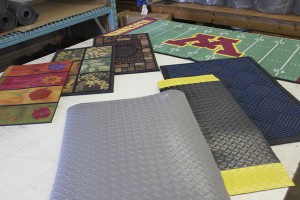 North American Mat Co. offers mats ranging from ones cashiers stand on to ones people place by their front door to ones with sports themes.

A price was not disclosed. Pauline retired, though she is helping with the transition. Mike also works at Cabela’s in Owatonna and is learning more about North American Mat’s bookkeeping and other management aspects.

The company would like to see its mats in more Albert Lea and Austin businesses, too, he said.

The Hollandale-based company’s biggest seller is anti-fatigue mats, the kind that cashiers stand on to keep their feet from getting sore. Factory workers use them, too. Some local customers are Lou-Rich in Albert Lea and Brown Printing in Waseca.

Mike said he and Cory Slegh, the sales and marketing manager, are able to walk through a business, take measurements and provide an estimate of matting needs. North American Mat, they said, sells a large amount of desk chair mats and floor runners.

Slegh said the company is getting a new website to increase its online sales and presence. He said customers will be able to buy online and over the phone. Right now, customers typically order over the phone.

The company, at 308 Central Ave. N., gets some drop-ins but would like more. He said the company already has increased its supply of sports-themed mats. Minnesota Twins mats have sold well.

“We want when someone walks in to offer them anything they are thinking of,” Slegh said.

Pauline said customers at times come in seeking more durable outdoor welcome mats than the low-grade ones they find in retail stores. She said she has a two-year-old outdoor mat at home that looks as good today as it did out of the box.

Slegh noted that another popular home item is what’s called a spaghetti mat. They are mats made from vinyl loops and often go under grills to catch grease and keep decks clean.

The company’s biggest customer is Hobby Lobby. Mike and Pauline said North American Mat keeps inventory on hand to be ready to ship whenever Hobby Lobby orders mats. That level of service removes a shipping delay because the production already is done.

Slegh began as the sales and marketing manager in November 2011. He grew up in Hollandale with Mike Ravenhorst.

He said best part of working at a company with three people is that “there is no inter-office politics.”

He said he enjoys the craftsmanship of making custom mats and is learning more about sales and marketing.