Meet one of the Honored Survivors 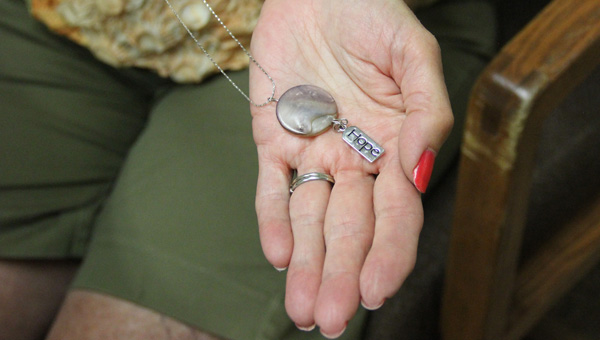 Judy Olson, cancer survivor, holds a necklace with the message of "hope" engraved on it. Olson said her son, Steve Olson, found the necklace on the side of the road while working in Albert Lea. Judy says the family is a big believer in signs. --Kessa Albright/Albert Lea Tribune

At 3 months old, Albert Lean Judy Olson was diagnosed with retinoblastoma, a rare cancerous tumor in the retina in the eye.

Olson had surgery to remove the tumor, and the doctors told her parents that if the tumor didn’t come back after five years she would be okay.

And it didn’t. The only problem for Olson was that she had to wear a glass eye for the rest of her life.

As a kid she wasn’t concerned with the glass eye, but as she grew into a teenager she became insecure about it. She was concerned about how it would affect her love life when she met her husband, Larry. Larry knew about her cancer and the glass eye but that didn’t stop him from falling in love with her. 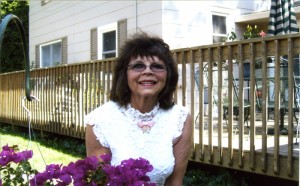 Judy Olson was diagnosed with retinoblastoma, a form of eye cancer, when she was 3 months old and has had to wear a glass eye her whole life. In 2010 she was diagnosed with breast cancer and was named an Honorary Survivor by The Relay for Life committee. -- Submitted

They have been married for 49 years and have three children.

Named an Honored Survivor for the 10th anniversary of the Freeborn County Relay for Life, Olson is sharing her story of cancer with residents across the county this summer.

Nominated for the honor by her daughter Gina Gullickson, Olson rode in the Third of July Parade in Albert Lea and will speak at the luminaria ceremony at the Freeborn County Relay for Life Aug. 10.

Fellow cancer survivor Hellen Allison is also being recognized at the event.

Olson said that it was very nice that she was named an Honored Survivor, but many people survive cancer, too.

In July of 2010 the Olson family was getting ready to go on vacation to their cabin in Alexandria. With their bags packed, they were ready to go. 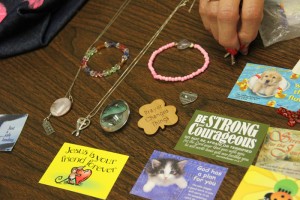 A collection of good luck charms Judy Olson carries with her everywhere in her bag that says "#1 Gram!" made by her granddaughters. --Kessa Albright/Albert Lea Tribune

Olson said she thought she was perfectly healthy to go on vacation because she had a mammogram six months before. But once at the cabin, she found a lump on her chest.

The vacation was cut short so she could get the lump checked by a doctor. It was a tumor indicating breast cancer.

“I’ve never really been mad I got cancer,” Olson said. “It’s a shock to your body.”

Olson went through eight chemotherapy surgeries and had a radiation treatment every day for 30 days. She had a Stage 3 chest cavity. The cancer preventatives weren’t working.

In February of 2012 Olson said she felt that something “just wasn’t right.” The doctors told her that the cancer moved from her chest and was hanging in her abdomen.

“I should’ve put a ‘no visitors’ sign on me,” Olson said. “I didn’t want those visitors hanging there!”

She had to get shots regularly and take chemotherapy pills every day after being tested again in August.

“I really didn’t want to but I will if I have to,” Olson said about taking the chemotherapy pills.

The chemotherapy caused her to get very sick and her weight dropped down to 114 pounds. Olson wasn’t angry or upset, she stayed very positive through the treatment. But she was confused to why the cancer came back.

“Even if you get sick, keep doing what they say,” Olson said. “Because it’s working.”

Olson’s other daughter, Angie Langerud, was diagnosed with breast cancer in 2002. In February of this year the family had a “celebration of life” for Langerud living 10 years cancer-free.

According to cancer.org, it’s not uncommon for more than one member of a family to have cancer. It can happen just by chance, because family members have environmental and lifestyle influences in common or because of an inherited gene that leads to an increased risk of cancer.

“People always ask me if it was harder having a daughter with cancer or having it myself,” Olson said. She felt her daughter’s cancer was out of her control so it was harder coping with that.

Olson’s father and sister both suffered from cancer. Her father struggled with cancer for 21 years and her sister had bladder cancer. Olson said her father and daughter were her role models while she went through treatment for breast cancer. Their positive attitudes made her look at her condition in a brighter light.

Greeting cards. Hundreds of greeting cards filled Olson’s mailbox during her treatment. Decorative cards with poetic messages signed by family, friends and even a few people she’s never heard of. Olson has received almost 500 cards since she was diagnosed with breast cancer two and a half years ago.

These cards along with other gifts made Olson feel she wasn’t alone. Family members thought of her when they found trinkets and cards with prayers and an encouraging picture.

One day her son, Steve, was working in Albert Lea and found a necklace on the side of the road. The necklace was in perfect condition with a circular shell with a charm that read “hope.” He picked up the necklace and brought it to his mother.

The family believes in signs from God. Simple signs like finding a piece of jewelry on the side of the road with a message of hope. Or a card in the store that someone else wrote but expresses how they feel.

Olson was also showered with gifts from her family.

“My husband, Larry, surprised me with many gifts,” Olson said.

Her daughter-in-law gave her a prayer shawl she uses often. The purse she carries her good luck charms in is one her granddaughters made that says “No. 1 Gram” with a cancer ribbon drawn on it.

As she was being wheeled to the operating room for her 21st surgery, family members lined the hall and each person gave Olson a high-five.

“I have the most awesome family,” Olson said.

Olson works as an instructor of a bone-building class and bowls a few nights a week. Instead of dwelling on her struggles, she fills her time by checking things off on her bucket list.

The first thing she did on her bucket list was buy a 10-year-old, bright yellow Mustang. The license plate on the car says “HAY JUD” because she worked with hay on the farm when she was younger and “JUD” is short for Judy.

Olson also wants to act in a play and ride in a semi. If she were to win the lottery she would take her entire family to Disney World or Disneyland.

“You think about how each day is a gift,” Olson said.

She said she stays strong, positive, prays a lot and will never give up.

“Without my faith in God my journey would have been a lot tougher,” Olson said.