A couple of weeks ago, I received a call from Lloyd Kaplan of Owatonna, who invited me to join him at the new Steele County History Center that had just opened this past spring. 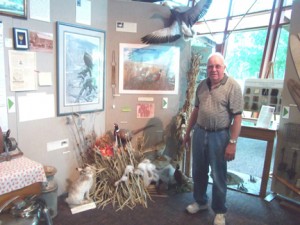 Lloyd Kaplan stands beside one of the many wildlife exhibits on display at the new Steele County History Center in Owatonna.-- Dick Herfindahl

I first met Lloyd a few years ago when I did an article about him and his trapping. He first approached me when I was at the Steele County Historical Society meeting that they hold once a year at the old Boathouse on Beaver Lake. I had written in one of my columns that there didn’t seem to be the number of trappers around that there once was. He told me that he was a trapper and was still doing it so he invited me to his home to see what trapping was all about.

Lloyd, who is in his mid-70s, has since sold his home in the country and moved to Owatonna, but is still doing some trapping.

If folks have a problem with muskrats or other critters they can still call Lloyd, and he will come to the rescue.

This past I week I met Lloyd in Owatonna and he gave me the deluxe tour of the new Steele County History Center. It is indeed quite a facility that is located on the east side of the Steele County Fairgrounds.

The new history center was built without any tax dollars — it was all donations from individuals and businesses.

The main reason for his call was to show me the fantastic display that they had put together about habitat and the history of this area of the state. I had asked two of my grandsons, Trevor and Grant, if they wanted to tag along and see what I anticipated being an interesting experience. I was not disappointed because Lloyd gave us the deluxe tour and took the time to explain each era.

The first thing you notice when entering the building is the fully-sized buffalo mount that is in the middle of the lobby.

This introduces the display that we were there to take in. The display is set up to depict four eras of our history; 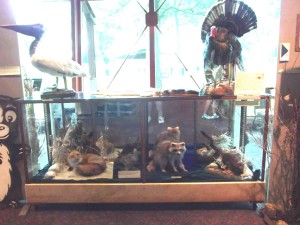 The animals shown here are just some of the many that are being displayed at the Owatonna History Center through September 1.

It was interesting to see how each era had an effect on our wildlife habitat. Prairie grass was abundant when the buffalo were roaming the area, but once the land was settled the buffalo and prairie grass started to disappear.

There were so many different and interesting things to see; everything from Indian artifacts to a bone crusher that was used by buffalo hunters to crush buffalo bones.

The crushed bones were sold back east for farm fertilizer, and local farmers fed them to the chickens instead of crushed oysters.

There was a different type of plow called a swamp angel that was pulled through sloughs by oxen to drain swamps and create farm land.

The whole display had numerous mounts of various animals and fowl that were abundant in each era.

Many of the mounts were either donated or on loan from area taxidermists or private parties.

There was a separate display for the Beaver Lake area featuring among other things; you guessed it, a beaver. There was a pumpkin seed duck boat on display and I learned what the hole on each end of the boat is for.

There was a pair of duck shoes that didn’t look anything like the ones from today with the same name.

It is interesting to see how many of those that were abundant in those early days are still around today.

One display had a pheasant, snow goose, jack rabbit and a picture of an eagle. Kaplan said that it is illegal to display a mount of an eagle so you can only use pictures.

He also said that one reason for the decline in the pheasant population is the increased number of eagles and hawks in the area.

There was a display of antlers from the tsunami deer, which are raised on an area game farm. The world champion rack for that species of game farm raised deer is also on display.

Kaplan said that game farms of today have a lot to do with the preservation of our outdoors heritage.

Lloyd said that we are coming full cycle from where we once were when it comes to preserving habitat.

When the land was first developed it was for settling and clearing land for farming and eventually much of the wildlife habitat was destroyed.

Now there is new habitat being created through wildlife management areas, set-aside and land being donated for habitat. It is almost like we are coming full cycle.

If you get a chance I would recommend taking a short drive and visiting the Steele County History Center to see this display, it is well worth it.

If you are interested in trapping or in learning about it, Owatonna will be hosting the National Trappers Convention at the Steele County Fairgrounds Aug. 2-5.

According to Kaplan they anticipate breaking the record for attendance at this year’s event. It sounds like it could be an interesting event for trappers and non-trappers alike.

Until next time, take a little time to relax and enjoy a picnic at an area park, go for a walk or wet a line and soak a worm, but mainly just enjoy the outdoors experience and stay cool!