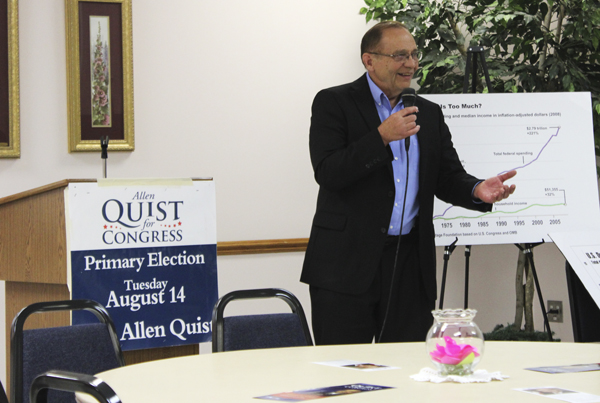 Quist, a former state representative, wants to curtail the growing debt by cutting federal spending across the board.

“Farm programs are on the table with everything else. I will be the first to say something,” he said.

Quist’s comments came at the Albert Lea Senior Center in Skyline Plaza. About 20 people attended the town hall forum. Quist is a Republican who faces Sen. Mike Parry of Waseca in the Aug. 14 primary election to decide which candidate will run against incumbent Democrat Tim Walz of Mankato.

One audience member said he had concerns about Allen Quist’s electability because on one hand he rails against federal spending but on the other accepts farm subsidies. Quist owns an 800-acre farm that his son manages while Quist campaigns.

He said he has no choice but to take the subsidies. He said for farmers to remain competitive, they must. He said he plans to attend Farmfest in Redwood County in the second week in August and tell the farmers that the federal government is like a big train heading for a cliff. The ag sector opposes the $16.4 trillion national debt but wants to talk about how to protect its car, rather than how to save the train.

“The threat to agriculture is the financial collapse of the country,” Quist said.

After audience members grilled him with questions such as whether Walz would use the issue of farm subsidies against him like Walz did to his GOP opponent two years ago, Quist reached a conclusion on the topic: “If the guideline is how we are going to protect our part of the take, we have lost our country.”

Quist would like Congress to set spending limits, balance the federal budget and bring down the national debt — all within five years. He said America is five years away from being where economically troubled Greece is when it comes to its debt-to-GDP ratio. Quist would like America to be more like Australia, which he said has rolled back regulations and is preparing for America’s financial collapse. Meanwhile, it has seen its gross domestic product grow at a rate faster than America’s. He gave Australia at 5 percent, with America at 2 percent.

He said American leaders are shirking their fiscal responsibility to address the mounting debt. He pointed at a chart — which he has touted throughout his campaign — showing the debt growing higher and higher.

“This is Banana Republic-type of economics,” he said.

Quist said capitalism’s relationship to government is like a sled-pulling contest at a county fair. No matter the size of the engine, if there is too much weight on the sled, it won’t go far or fast. He said America needs to shrink government to free up the engine of free enterprise.

“If you increase the weight on the sled, you lock in high unemployment,” Quist said.

He would like the House and Senate to set limits of what they are allowed to spend.

Three things he would like leaders in Washington to do:

1. Not to spend any more than they had.

He said he would like health care to stop practicing defensive medicine — defense as in preventing malpractice cases by running up costs on the consumer. He would also like to limit jury awards for malpractice lawsuits and to see more upfront pricing.

Audience members wanted him to explain his plan for health care, which he did not do and opted to tell a personal anecdote instead. During the exchange, Quist said he does receive Medicare.

He said his way of creating jobs in the private sector is cutting back on regulations and the powers of agencies such as the Environmental Protection Agency and the Department of Education.

He challenges the audience to find a teacher who likes the federal government’s role in education. He said he believes the Department of Education is unconstitutional and said schools in America functioned better when left in control of the states.

He cited how regulations and permitting red tape brought an end to the Big Stone power plant in northwest Minnesota. He said as a result energy costs go up and the United States becomes less competitive in the global market.

“We are their best customer. Wouldn’t they not want to get in a trade war with us?” he asked.

Other points Quist made:

• He said he favors term limits for senators and representatives.

• He said Congress needs to assert itself and put conditions on how much Obama or any president can use government resources to travel the country. He accused Obama of constantly campaigning.

• He called for a government agency that has the power to roll back regulations and cited how the Environmental Protection Agency is judge, jury and executioner for many matters. “The best thing government can do is get out of the way.”

• He called on voters to ignore petty, personal attacks and focus on issues.