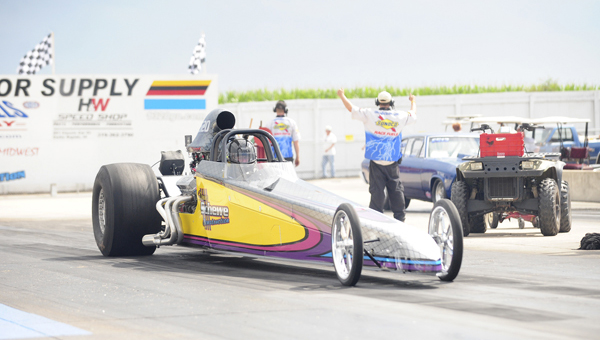 Racing since he was in his late teens, 62-year-old Austin resident Dennis Schewe still spends 23 weekends a year on the road with his wife, Gerry, flying down the drag strip. Last weekend the two could have been found at the Cedar Falls Raceway for the Arnold Motor Supply Night of Fire in Cedar Falls, Iowa. The raceway was once called Neita Raceway and was where Schewe got his start in the racing world.

Gerry is Schewe’s right hand woman. Ever since they married 24 years ago, she has been helping him make adjustments to the car and make travel arrangements. 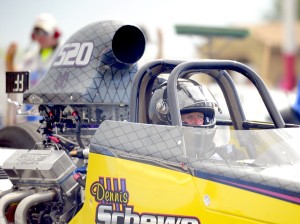 “I trust her totally,” Schewe said. “She listens to the motor, she watches the run, watches the tires and she sets up all the motel rooms. Basically she’s the team manager.”

Schewe said Gerry grew up on a farm around tractors, but learned more of the mechanical side when she met him.

“She doesn’t do as much wrenching on cars as she did at first, but when we changed the transmission, she helped lift it into place and she knows all the tools we need to do that,” Schewe said.

Schewe said many couples work together because of the time spent on the cars and traveling to races.

To his knowledge, Schewe said Gerry hasn’t raced herself. He said he’s not even sure that she wants to because on the starting line it takes a certain level of competitiveness.

Schewe competes in the super-pro class, a class that is allowed to use electronics to help program the car. In his class in the National Hot Rod Association Schewe is in sixth for points out of the 30 people signed up.

On any given night though, races like the Night of Fire can have up to 60 or 70 people in the super-pro class.

“The more people, the better,” Schewe said. “It’s more challenging because then you have to win more rounds to win the race. The way I look at it is this is what drives me to be the best that I can be.”

Schewe has his drag car dialed in between 7.43 seconds and 7.80 seconds depending on different variables. The dial in time is the time it takes a racer to respond to the amber lights on the staging lights. The fastest he has sped down the track was 185 miles per hour.

While it may sound fast, Schewe said speed is relative.

“It’s the acceleration that puts you back in the seat so it’s hard to move your head forward,” Schewe said. “We go from standing still to covering 60 feet in one second. For me that’s the race. The feeling of being pressed into the seat at three and a half times your body weight is the fun part of drag racing.”

When Schewe first became interested in racing, muscle cars were popular so his first race car was a 1967 Oldsmobile 442. Now he sticks to drag cars.

Schewe said he lost his first race pretty bad, but he knew he was hooked.

“I knew going down the track the first time I was going to do it for a long time. I didn’t know I would do it my whole life,” Schewe said.

Schewe said the most important part of racing is consistency. He and Gerry go through the same routine and prepare the car the same each time before a race.

He said the other thing that is important in racing is concentration. Schewe said he has so much concentration when he is waiting for the staging lights that in order to get his attention people have to step in front of his car in his line of vision because he concentrates on the lights and tunes out everything else.

Schewe said after all these years he still gets butterflies before each race.

“Once I sit down, slide in and strap in and start the motor, it’s gone,” Schewe said. “I’ve done this so many times I don’t have nerves after I start the motor. It’s almost calming.”

In Cedar Falls, Schewe went out in the second round, but didn’t let it bother him.

“Losing does hurt, but it also makes the next time you win that much better,” Schewe said. “As racers, we have a real short memory. We’ll say, ‘I didn’t react to the start as good as it should have been,’ we analyze that and put it in our memory and forget about the loss. It’s so hard to win in these classes because the competition is so tight.”

Schewe said he has run in about 524 sanctioned races and over the last 10 years have won about 25 of them.

Schewe dreams of winning a national NHRA event and also a world championship.

“We were close one year down at Tri-State in Earlville, Iowa,” Schewe said. “That would be the ultimate for me; to win the world championship and to have the number one on my race car.”