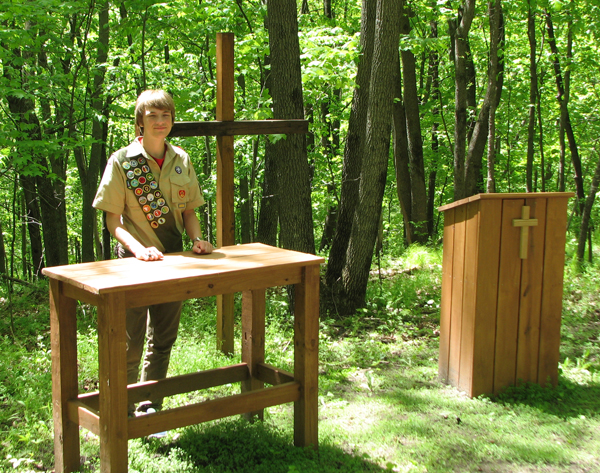 Hans Frank, 17, stands in front of his altar and podium at Good Earth Village camp. He made them for his project to earn his Eagle Scout title. -- Submitted

HARTLAND — A 17-year-old from this town has received the Eagle Scout ranking, the most prestigious honor in Boy Scouts. A traditional ceremony was held on May 20 to recognize his achievement with readings, reciting of Scout law, candle lighting, sharing of memories of him.

Hans Frank is a part of Troop 219 of Clarks Grove. He is the 48th Eagle Scout since 1978. He has been a part of the Scout program since he started as a Cub Scout in first grade. He was a member of that until he was old enough to be a Boy Scout in fifth grade.

“I wanted to do to it because a lot of my friends were in it, and it looked like fun,” Frank said.

To earn this esteemed rank, Frank had to work his way through the seven Scout rankings over the past seven years: Scout, Tenderfoot, Second Class, First Class, Star, Life, and finally earn 21 merit badges to become Eagle.

Merit badges serve as emblems of citizenship, nature, first aid, how to get along with people and leadership skills. Badges earned can include learning about sports, crafts, science, trades, business and future careers. There are more than 100 different badges available.

Scouts must have another Scout, family member or a friend present each time they meet with their merit badge counselor. Background information must be found on the subjects before work can begin. The counselor will sign the badge application once he is satisfied with the progress.

Frank also had to complete a big project that took him September through October in 2011 to finish. A newly-constructed altar and podium now stand at Good Earth Village thanks to him and a little help from his scoutmaster and four fellow boy scouts.

“The project is intended to demonstrate my leadership role,” Frank said.

Troop 219 meets every Monday night at the First Baptist Church of Clarks Grove at 7 p.m. There are about 20 boys involved with program, most of them several years younger than Frank. The Scouts have opportunities to do plenty of outdoor exploration by taking trips to places such as the Black Hills, S.D., Itasca, and Mackinac, Mich. They set up camp, hike, bike and enjoy nature.

“We don’t sit around tying knots,” Frank said of a common misconception people have about Boy Scout retreats.

Most Scouts, after earning Eagle Scout, continue earning badges. With every five additional badges earned past 21, Boy Scouts receive an Eagle Palm award. Frank will turn 18 this summer so he doesn’t plan on earning many more badges. He plans to be a Junior Assistant Scout Master next year and help kids with their own merit badges.

“I’m too old to be a Boy Scout anymore, but I hope to continue helping with the program,” Frank said.