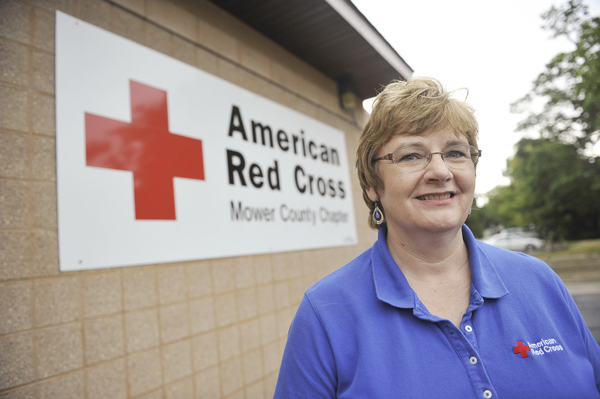 Elaine Hansen will now be serving as executive director of the Freeborn-Mower County Chapter of the Red Cross. -- Eric Johnson/Albert Lea Tribune

The merger of the Freeborn County and Mower County chapters of the American Red Cross is now complete.

The two chapters, consolidated last September under a national restructuring of the organization, are now under one title: the Freeborn-Mower Chapter of the American Red Cross.

Chapter Executive Director Elaine Hansen wanted to reassure people the organization is providing the same services that have been provided in the past — just more efficiently.

She said the consolidation will save both time and money, allowing the nonprofit organization to be better stewards of donations.

The Red Cross responds to small and large disasters, providing food, water, clothing and mental health counseling to victims of the disasters. It also organizes blood drives and also provides CPR, first aid and water safety classes, much through donations from the public.

Hansen said under the consolidation offices in both counties will be open, and she and Emergency Services Coordinator Chris Avery will service both locations.

The two women work closely with local volunteers. There is also one board of directors between the two counties.

Previously, there had been an executive director for each county.

Hansen, who has been involved with the Red Cross for 17 years, mostly in Mower County, said all of the changes have now been fully integrated and she is glad to see the organization move ahead.

“It’s exciting to be at this point where we can be more efficient and effective and focus more on the things that really matter to people — delivering help where help is needed,” she said.

She noted the organization is always looking for people who would like to volunteer.

Opportunities are available in the office, at bloodmobiles, in the classroom or in the aftermath of disasters.