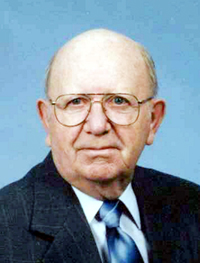 Funeral services will be at 11 a.m. Monday at Salem Lutheran Church in Lake Mills, with the Rev. David E. Jordon and the Rev. James Mantel officiating. Burial will be in Salem Memorial Cemetery, rural Lake Mills, with military honors conducted by the Otto/Chose Post No. 235 of Lake Mills. Visitation will be on Sunday beginning with a sharing service at 3:30 p.m., which all friends and family are invited to attend. Public visitation will continue from 4 to 6 p.m. at Mittelstadt Funeral Home, 902 East Main Street and one hour prior to the service at the church on Monday.

Roy G. Bendickson was born on Feb. 7, 1922, in Winnebago County, Iowa, to parents Amos and Helen (Wigern) Bendickson. He was baptized and confirmed at Bethel Lutheran Church in Vinje, Iowa. He grew up in rural Iowa and quit high school to help his father farm.

Roy was a World War II veteran, serving his country in the U.S. Army from 1943 to 1946. He was stationed in the South Pacific under Gen. MacArthur. Roy was thrilled to be a part of the first Honor Flight from Winnebago County. He belonged to both the American Legion and the VFW and was honored this past Memorial Day for being a Legionnaire for 60 years. Roy was also a member of the Eagles.

Over the years, Roy worked at many jobs, but was most remembered for his 25 years as head custodian at Lake Mills Community School. He was proud to have served on the Lake Mills ambulance for many years. Roy enjoyed golfing, bowling, dancing, getting a new car every year and going to Bonanza almost daily for lunch to see “his girls.” Roy had perfected the art of “charming” all the waitresses.

In 1959, Roy was united in marriage with Palma Honsey. She died in 1989. Roy was married to Elaine Nappe Solomonson in 1992 and she preceded him in death earlier in 2012. With his marriage to Elaine, Roy proudly accepted the role of dad, grandfather and great-grandfather.

The family would like to thank the staff at Mercy Medical Center North Iowa and at the Muse Norris Hospice Inpatient Unit for the tender, compassionate care Roy received during his last two days.