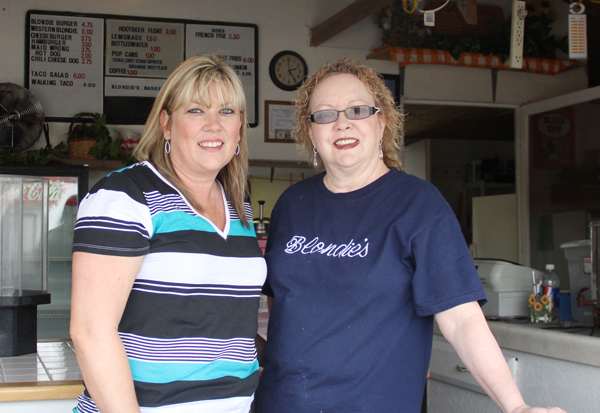 Blondie’s Baskets owners Carly Solland, left, and Mary Umstead pose for a photo last week at the Freeborn County Fairgrounds. They opened their stand today and will be open throughout fair week. -- Kelli Lageson/Albert Lea Tribune

A local vendor will be back again serving up its comfort food for the ninth straight year at the Freeborn County Fair.

Blondie’s Baskets, owned by Carly Solland and her mom, Mary Umstead, is open today at the fair for those who are there setting up and for judging. 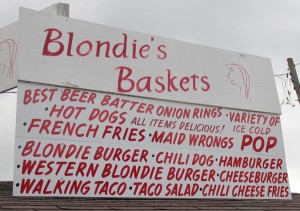 “We see the same faces every year which is fun,” Solland said.

The stand, which is just south of the fair office and Grandstand, is also open the Friday following fair week for the Freeborn County Relay for Life event.

“We’re awfully glad for all the repeat customers,” Umstead said.

The stand usually opens around 10 a.m. each day of the fair. Solland said it closes around 11 p.m. during fair week, except for Sunday when it will likely close around 9 p.m.

The menu at Blondie’s Baskets includes comfort food favorites like its famous Made Wrongs, which are crumble burgers. The feature that’s wrong is that the pickles and onions are on the bottom, Solland said. Other menu items are hot dogs, burgers, chili dogs, walking tacos and onion rings, among other things. Solland said they haven’t changed up the menu too much, but mostly because they don’t need to.

“We like to keep it old school and keep what sells well,” Solland said.

Solland and Umstead get lots of help from friends and family for the food stand. About a week before the fair they all come to clean up and prepare the stand for the busy week. Then there are food orders to make and lots of lists so they don’t forget anything. Though there are many food stands to choose from, Solland said they don’t feel like they’re in competition. In fact, besides their own food, both Solland and Umstead have to get to other stands for their favorite fair food.

“Casa Zamora — I eat there every day of the fair,” Solland said.

She said it doesn’t matter that she could go to the restaurant in Albert Lea any time, she still likes to eat at that food stand during the fair. And it’s right next door to the Blondie’s stand. Umstead also has her favorite staple.

“I have to get a chili cheese dog each day,” Umstead said.

Both agree that their favorite part of the fair is seeing familiar faces and having a place where people can gather and visit. The Freeborn County Fair opens Tuesday and ends Sunday.