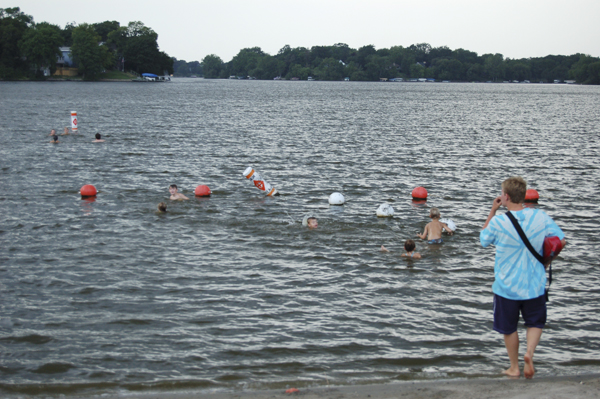 Children swim in the lake with the dark sky above them before the luau at City Beach got rained out. Lifeguard Luke Sundblad looks on. -- Kessa Albright/Albert Lea Tribune 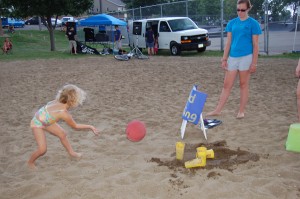 A young girl plays sand bowling at the beach luau put on by the Albert Lea Parks and Recreation Department Wednesday at City Beach. --

The Albert Lea Parks and Recreation Department had planned activities for the children — all free of charge. There was a bouncy house and sno-cone station set up. Things got rolling at 6 p.m. Kids played volleyball with a ball as big as they were and younger children played sand bowling. With a lifeguard on duty, children were swimming in the lake. The fun was set to go until 9 p.m. 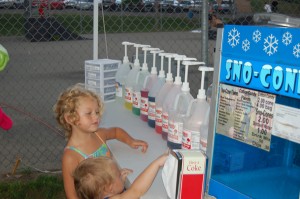 Two children pick out sno-cone flavors at the City Beach luau put on by the Parks and Recreation Department on Wednesday.

But at 6:45 p.m. lightning flashed, the skies broke and the beach-goers were soaked.

“It’s a downpour!” someone yelled.

As heavy raindrops fell, parents dragged their kids by the wrists to their cars to go home. People already wet in their swimsuits were looking to dry off in their vehicles.

Recreation Program Supervisor Jenny Davis said they had to cancel the luau. She said 65 was a good turnout but down from last year. She speculated that gray skies hurt turnout. The worst of the storm passed to the south, down in Iowa. Albert Lea caught the northern tip. 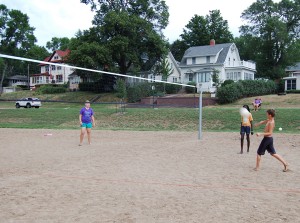 A young boy hits a volleyball over the net to Parks and Rec employee Bethany Sekora at the City Beach luau Wednesday.

She said as soon as she and her assistant spotted lightning, they and lifeguards immediately got the children out of the water and began deflating the bouncy house. By 7:05 p.m., the rain stopped, but because of foreboding skies and the fact that most children went home, the luau didn’t resume.

According to KIMT weather, the storm produced less than one-tenth of an inch of rain. The stated amount was 0.04 inches.