Theater is her 2nd love 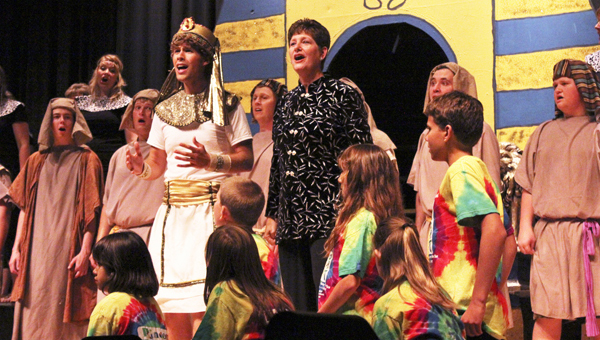 The Narrator, played by Diane Heaney wearing black and gold, and Joseph take the lead in the reprise of “Any Dream Will Do,” accompanied by the 11 brothers and children. The musical “Joseph and the Amazing Technicolor Dreamcoat” contained 25 musical numbers. --Colleen Thompson/Albert Lea Tribune

BLUE EARTH — In Albert Lea, Diane Heaney is known as the high school choral director. To Kiester residents, she is recognized as one of the locals.

But to Blue Earth music supporters, she is known as The Narrator, one of the lead roles in the “Joseph and the Amazing Technicolor Dreamcoat” musical.

“It’s just been a lot of fun,” Heaney said. “The rehearsals have been short so it’s not overwhelming.”

Auditions for the show were May 19 and 20 and rehearsals got going around the time school let out and were held on Tuesdays, Wednesdays and Thursdays from 6:30 p.m. to about 10 p.m. Heaney never did audition yet still snagged the starring role.

Nancy Steinke, the director of the musical, “just called me up and asked if I wanted to do it,” Heaney said.

Heaney and the theater are no strangers. She remembers attending her first play, “Shakespeare’s Tempest,” even though she was just 5. Her mother, Mary Heaney, encouraged her theatrical love and served as her vocal coach all while she was growing up.

Heaney graduated from Morningside College in Sioux City, Iowa, in 1983 with a bachelor’s degree in music education. She then received her master’s in music education degree from the University of Cincinnati College-Conservatory of Music. Although she originally planned on becoming a band teacher, she chose the choral side of the music spectrum and has been directing the Albert Lea High School choirs since 1993. Since her college years, she has participated in several community theater musicals such as “Forever Plaid,” “Swing!,” “My Way” and “Smokey Joe’s Cafe.”

“If I hadn’t gone into teaching, I would be doing this for a living,” Heaney said. “Theater is my second love.”

In “Joseph,” Heaney tells chapters 37-50 from the Book of Genesis. Full of dancing and choreography, it highlights Joseph’s jealous brothers selling him into slavery after Joseph boasted of his dreams of them bowing down to him. It explains Joseph’s journey from the house of wealthy Egyptian Potiphar, to prison, to Pharaoh’s second in command and his ultimate reunion with his father and brothers. It is completely sung; there are no spoken words.

“Shows that have no dialogue are easier to learn,” Heaney said. “It all fits together really well.”

The musical, with music by Andrew Lloyd Webber and lyrics by Tim Rice, includes hits such as: “Any Dream Will Do,” “Jacob and Sons,” “Joseph’s Coat,” “One More Angel in Heaven,” “Those Canaan Days” and “Benjamin Calypso.”

The starring role in the show is played by Alex Ehrich, a 2007 graduate of Blue Earth Area High.

“He came back from Belize for rehearsals and is going back the day after the final performance,” said Steinke.

Pharaoh, based on rocker Elvis Presley, is played by Kurt Steinke, the director’s son. The rest of the cast is made up of Jacob, the 11 brothers, Potiphar, Potiphar’s wife, the butler, the baker, the Ishmaelites, three ladies, the brothers’ wives, an adult chorus and a children’s chorus of third to fifth-graders.

“They are experienced actors and musicians,” Heaney said. “We’re committed to putting on a good show.”