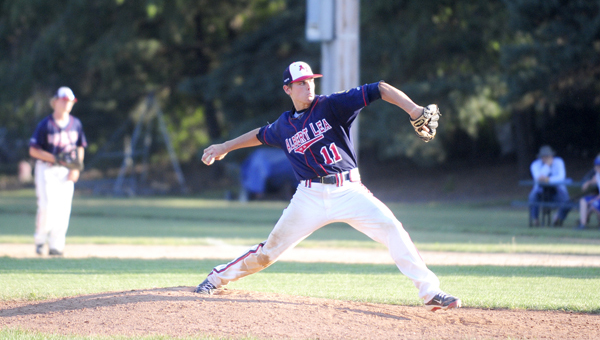 Cole Sorenson winds up for a pitch in the top of the fifth on Thursday against Rochester Century. -- Brandi Hagen/Albert Lea Tribune

The Albert Lea Legion baseball team clinched the regular season title and took the No. 1 seed in playoffs on Thursday after beating Rochester Century 4-3 at home. 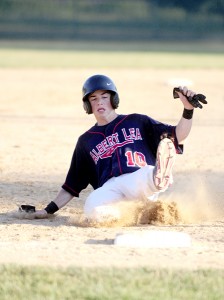 Jonathan Fleek slides into second base on a steal in the bottom of the fifth inning on Thursday at Hayek Field.

“It was a big win,” Tigers coach Jay Enderson said.

The Tigers scored the first run in the bottom of the first, but Rochester fought back and scored two in the top of the second.

The Tigers trailed 2-1 until the bottom of the fourth when Cole Sorenson worked his way around the bases by stealing.

He eventually stole home to tie the game with one out.

Carter Kortan ran the bases behind Sorenson and scored the next run to give the Tigers a 3-2 lead.

The Tigers held on to the lead until the top of the seventh when Rochester for a 3-3 tie game.

Albert Lea’s win came in the seventh inning after Rochester’s pitcher loaded the bases with walks and walked the fourth and final batter moving Sorenson home once again. 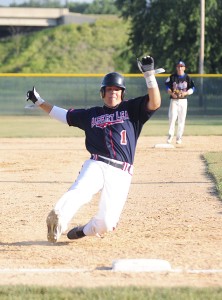 Sorenson not only scored two of the Tigers’ runs, but pitched all seven innings that led the Tigers to the win.

“Cole was good,” Enderson said. “He has a tendency to not trust himself and that’s when he throws a ball he shouldn’t. Tonight, he was solid all the way through.”

Enderson said it was a clean game and it was because of the rock solid pitchers that the game was so close.

The last time the Tigers faced Rochester the game went into 11 innings.

Enderson said it was a close one then too, but Tyler Woodside was the Tigers’ pitcher.

“Now it’s Cole’s turn to keep us in the game,” Enderson said.

Enderson said the win just shows his guys don’t give up.

“You can be up, you can be down. We were down early and we were tied late,” Enderson said. “We battled back and that’s our biggest asset.”

After Thursday’s game the Tigers have an overall record of 18-8 and are 9-2 in district play.

There is one game remaining in the regular season. It will be played against Austin today at 5 p.m. at the Riverland complex in Austin.

“It’s a game you want to win,” Enderson said. “Do we have to win? No, but having clenched the title we’re going to go in there a little more relaxed.”

Playoffs begin next week, and the Tigers will play their final home game on Tuesday at 6 p.m. against Kasson.

On Thursday they will travel to Rochester for tournament play.