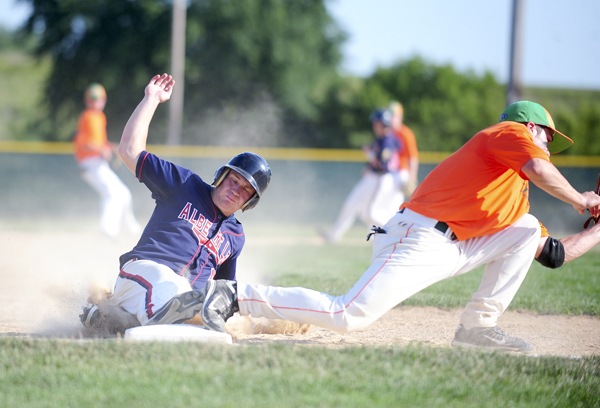 Albert Lea Legion’s Ethan Abben slides into third base on Tuesday at Hayek Field during a game against Kasson. -- Brandi Hagen/Albert Lea Tribune

The Albert Lea Legion held Kasson to two runs in the sixth inning to win its first playoff game on Tuesday at Hayek Field. 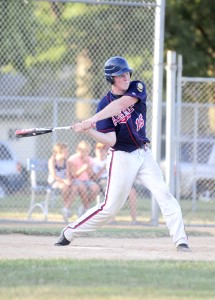 Tyler Woodside swings at a ball in the bottom of the fifth inning on Tuesday. The game against Kasson was the first round of playoffs and the Tigers won 10-2.

Tigers coach Jay Enderson said Kasson was an unknown competitor who chose to be the No. 8 seed before the season even started.

“They didn’t know their numbers,” Enderson said. “And they weren’t necessarily the No. 8 seed. They were better than that as you can see.”

Enderson said both pitchers were solid which kept the game close for the first four innings. Tyler Woodside was the Tiger’s pitcher and Lucas Unger was the Canes’ relief pitcher.

Enderson said Unger has only played four games with the Kasson Legion, but the Tigers have faced him in past years and knew he was strong.

Kasson was taken out of the eighth on a double play while the Tigers scored four runs in the bottom of the inning.

“That play really shut the door on them,” Enderson said. “Any chance of them coming back ended right there.”

Playoffs will continue at John Adams Middle School Thursday at 4 p.m. with the Tigers taking on Winona.