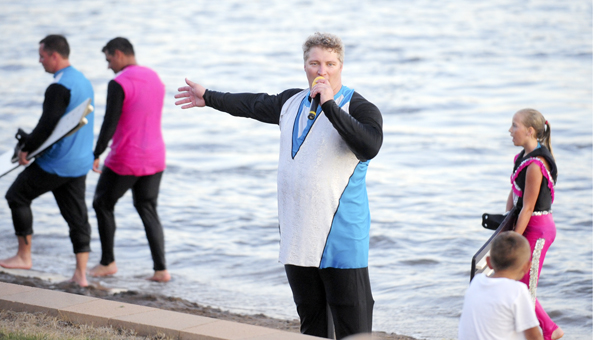 Mike Johnson speaks at the conclusion of Thursday’s Bayside Ski show at Edgewater Park Bay. Johnson has been the president of the club off and on for the last 10 years. --Brandi Hagen/Albert Lea Tribune

Next weekend more than 1,000 skiers will be performing at Edgewater Park Bay for the 2012 Midwest Regional Water Ski tournament.

Bayside Ski Club president Mike Johnson said it is the third time Albert Lea has been able to host the tournament since the club began nearly 50 years ago.

He said Albert Lea’s team of 25 skiers and 40 total members is easily the smallest group that will be competing.

Johnson said some of the groups will bring more than 100 skiers.

“From a competition standpoint, it’s a little deflating just because there’s no way we can compete with people that are that much bigger than us,” Johnson said. “At the same point and time, it’s exciting to see what these other teams are doing with that many people.”

He said when it comes down to it, it’s the same concept, there are just more ropes and more horsepower in the boats.

The Bayside Ski Club will roll out the red carpet and perform its show choreographed by Kristin Dulas, the 2012 All-American Music Awards.

The tournament begins Friday and will run through Sunday. It is free to attend and bleachers will be set up to accommodate the crowd.

Johnson, who has been the president of the club off and on for the last 10 years, doesn’t just stand by and watch.

In the 2012 Bayside Ski show Johnson announces and performs in five of the 13 acts.

“I get to ham it up a little bit and have a good time,” Johnson said.

Johnson started skiing when he was 15 years old and on a family vacation.

“I was hooked,” Johnson said.

One of the things Johnson learned to do is barefoot skiing. He said it doesn’t hurt his feet like people think it does. He said walking across a gravel parking lot hurts more than barefoot skiing.

“It’s really a great feeling to be able to walk on water like that,” Johnson said.

He said he learned to do it when he was 26 years old.

“My friend and I would get up every morning and fall on our face at 40 miles per hour and think, ‘why did I get out of bed to do this?’”

Another act that Johnson is involved with is going over a jump.

Johnson has gotten the hang of it, but said his wife, Neda, loves to share the story when he first tried doing the jump when he was about 23-years-old.

“Everybody always tells you about how slippery the jump is,” Johnson said. “I thought, ‘you’re on water, how slippery could it really be?’ When I hit it the very first time, my skis went flying one way and I landed on my side and sort of rolled over the top of the jump and into the water.”

Johnson said it has been rewarding being involved with the club because now he’s seeing 11-year-olds mastering the jump.

Now that he has a family, a wife and three children, Johnson is passing down the trade. He took his kids on the water with him when they were less than a year old and now they are getting involved with the shows.

Johnson isn’t the only one whose whole family gets involved. He said he has seen three generations of families on the water at the same time and sometimes there are five to six members of a family in the show.

The club is always looking for new members and people looking to be involved but not ski can drive the boats, run the sound, act and run the Snack Shack. And for those who want to give skiing a shot, anyone with little to no knowledge is welcome to join because the club spends Saturdays teaching people how.

The current age range in Albert Lea’s club is 1 to mid-50s.

“There really is no limit on who can come out,” Johnson said.

For more information on the club visit its website at http://www.baysideskiteam.com.