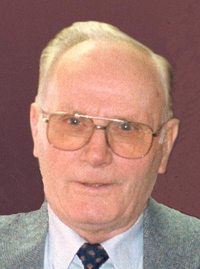 Vernon was born June 12, 1920, in Freedom Township, Waseca County, to Emil and Agnes (Larson) Moe. He has lived in the Pemberton area and the New Richland area. Vernon married Vernelle Oftedahl who passed away in 1957. He was then married to Joy Echternach in 1967. Joy passed away in 1998. His life occupation was farming. While in the Pemberton area he did custom corn shelling and hay baling and then moved to the New Richland area where he farmed. Vernon was a member of St. Peter Evangelical Lutheran Church and had been active in many of the churches activities.

Vernon was a veteran of the Army during World War II. He had served in the South Pacific and was part of the invasion of five Islands. He witnessed the raising of the flag at Iwo Jima. Vernon was also active with the veterans organizations and enjoyed being  in many parades. Vernon will be remembered for being a kind, gentle and giving person. Vernon was also remembered for being such a good-natured man. Vernon loved his family, especially his grandchildren and would do anything for them.  Vernon will be remembered as a fare, true and humble person