Chelsea LeBrun and Joshua Underly were married in a double-ring ceremony Oct. 15, 2011. 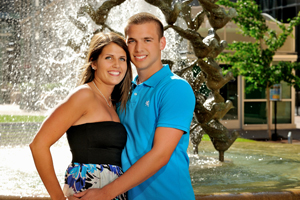 They will be renewing their vows in front of their friends and family July 21 at St. Theodore’s Church in Albert Lea.

Chelsea is the daughter of Brian and Megan LeBrun of Clarks Grove. Grandparents are Robert and Jamie LeBrun of Lismore and James and the late Carol Hanson of Babbitt.

Joshua is the son of John and Janita Underly of Waterford, Wis. Grandparents are Robert and Jan Underly of San Benito, Texas, and the late James and Elaine Bartz of Milwaukee, Wis.

Joshua is serving the United States Air Force and the couple is currently residing in Bellevue, Neb.