Chalene Smith and Marc Rasmussen were married on June 9, 2012, at the gazebo on Fountain Lake. The Rev. Joel Erickson performed the double-ring ceremony. 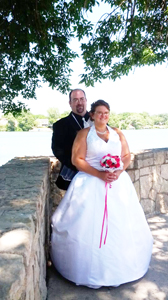 Parents of the bride are Robert and Janet Smith of Waseca.

Parents of the groom are Jerome and Gail Rasmussen of Albert Lea. Grandmother is Lila Rasmussen of Ellendale.

Maid of honor was Heidi Smith, sister of the bride, of Waseca. Bridesmaids were Tracy Nowacki of Waseca, Danna Wetzel of Janesville, Carrie Karst of Waseca and Katie Olson of Waseca, all friends of the bride.

Ring bearer was Isaac Rasmussen of Albert Lea, nephew of the groom, son of Matt Rasmussen and Teresa Rasmussen.

After the wedding a reception was held at the Moose Lodge in Albert Lea.

Host and hostess was Mark and Karen Sanderson.

The bride is a graduate of Waseca High School and is employed at Itron.

The groom is a graduate of Albert Lea High School and Minnesota State University, Mankato. He is employed at Sanderson Auto.