A 46-year-old Albert Lea woman was arrested Tuesday night after she reportedly stabbed her boyfriend after they had been drinking. 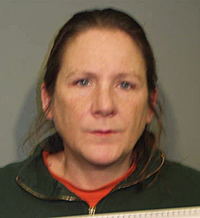 Michelle Yvonne Rowand allegedly stabbed the man during an argument at the house at 304 W. College St., according to the Albert Lea Police Department.

The 39-year-old man, whose name has not been released, was taken to Mayo Clinic Health System in Albert Lea for stab wounds to the shoulder and wrist. The injuries do not appear to be life-threatening.

Both Rowand and the man were reportedly drunk, and police stated they were fighting about finances.

According to police, Rowand was arrested for gross misdemeanor domestic assault and second-degree felony assault.

By law, she will appear in Freeborn County District Court today or Thursday.

Albert Lea Police Department Lt. Jeff Strom said officers have had previous contact with both Rowand and the man for domestic disputes.

She remains in custody in the Freeborn County jail and likely will be transferred to the Blue Earth jail after her court appearance.