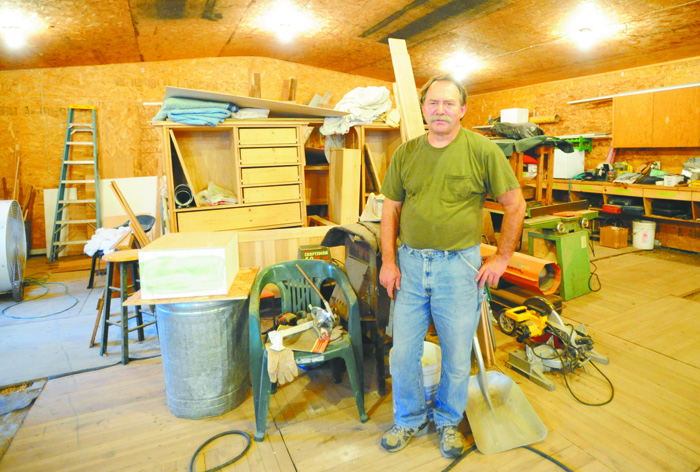 Steve Krogsgaard stands in a shed on his property amongst his woodworking projects and part of a bee hive. --Brandi Hagen/Albert Lea Tribune

MANCHESTER — When Steve Krogsgaard, a member of this small rural community, sees something he wants to try, he does.

He said he has a “hobby gone nuts.”

During the day, Krogsgaard works at Rare Aircraft in Faribault rebuilding old airplanes for people’s collections.

He said he has always had a passion for planes dating back to when he served in the Air Force and when he joined the Experimental Aircraft Association in 1972.

Krogsgaard said when he joined the EAA, an association where members fly, build and restore planes, he was member 59,000 something. Today, there are more than one million members signed up.

Krogsgaard calls Friday, Saturday and Sunday his time to play in his hobbies.

As a man with 34 years of construction work under his belt, Krogsgaard has used his skills to make five kayaks and a plane, construct bedroom sets, rebuild his home, build the “Beauty Barn” for his wife Renee’s business and many other projects.

Krogsgaard said he made the kayaks so that his children could each have their own and wouldn’t be fighting for a turn. His brother and dad had both built planes when Krosgaard was younger, so he also made one and put a Volkswagen motor in it.

“You get more satisfaction out of doing it yourself,” Krogsgaard said.

He said all these hobbies have come about just because he was curious about them.

Before he even started to grow grapes, Krogsgaard was making wine.

His dad had acquired a recipe for it and with the help of a kit, Krogsgaard started learning how.

“If you’ve got the fruit, then use it,” Krosgaard said.

Having something in common, Renee’s family used to grow grapes and when they would harvest them she would make jelly and Krogsgaard would make wine.

Krogsgaard started learning the ways of his other sweet treat from a man named Leo Meyers, an 88-year-old man who stays busy as a bee keeper.

There was a tree on the Krogsgaard’s property five or six years ago that had a bee hive in it, and Meyers helped Krogsgaard take it down. He then taught him how to make and maintain his own honey producing box.

Krogsgaard said last year more than five gallons was collected. He has hives around his yard and more in two different wildlife areas south of his home.

He said the family has eaten every bit of honey they have harvested. Krogsgaard is hoping to one day fly a plane again, but is sure he’ll find another hobby to pick up along the way.

“My hobbies keep me out of mischief,” Krogsgaard said.