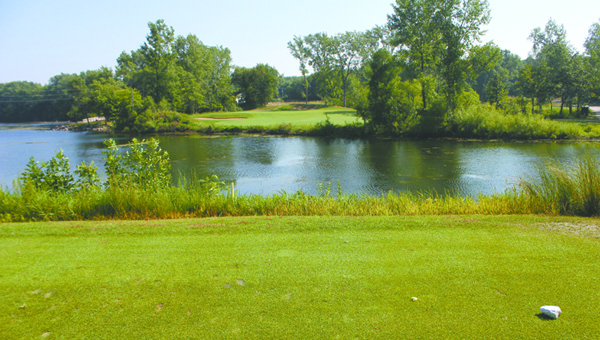 This hole didn’t exist two years ago. This shot over the southern end of Lake Kohlmeier was created in 2011 when the Owatonna Country Club had to redesign seven of its 18 holes as a result of losing 11 acres to the expansion of U.S. Highway 14. Some holes merely were altered, but Hole 13 is an altogether new one, built on land where woods once stood.

Now it is the favorite of the club’s head pro, Chris Laughlin: “It’s a lot like Augusta’s 12th hole.”

The men’s tee requires golfers to cross the water and land on a shallow green. The distance from the front to back of the green is about 10 paces, Laughlin said. The green is about 40 or 50 paces wide and surrounded by three bunkers.

If a player hits the ball over the lake but still too short, it will land on a low-level fairway, requiring a tough chip onto the elevated green, he said. Too far left and there are trees, fescue and a mean berm. Too far right is a little bit on the safe side but will make shooting par tough.

“I like this design because though it is just 140 yards, you’ve got to be precise,” Laughlin said.

Of course, let’s not forget the wind crossing the lake and swirling around a windblock made by the trees.

Golf for relaxation? This challenging par-3 provides a serene view in which to play the sport.

The women’s tee is to the south and doesn’t require the golfers to cross water.

“They can play bump and run if they like, but they have to play it straight. You get penalized for a hook or slice,” Laughlin said.

This is the fourth of a seven-part series featuring the best golf holes in southern Minnesota.