Alice Irene Lageson, 97, of Albert Lea, died Friday, Aug. 24, 2012, at St. John’s Lutheran Home. Funeral services will be at 11 a.m. Tuesday at Bayview/Freeborn Funeral Home. The Rev. Todd Walsh will officiate. Visitation will be from 4 to 7 p.m. Monday at Bayview and one hour prior to the service on Tuesday. Interment will be at Hillcrest Cemetery at a later date. Online condolences are welcome at www.bayviewfuneral.com. 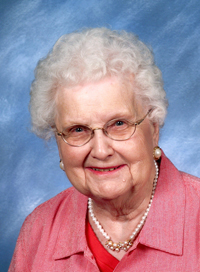 Alice was born Dec. 20, 1914, in Manchester Township to Iver H. and Anna (Medlang) Foley. She was the youngest of seven children. She was baptized and confirmed at West Freeborn Lutheran Church. She graduated from New Richland High School and New Richland Normal Training, before teaching in country schools in Freeborn and Steele counties.

Alice married Leon Lageson on March 31, 1942, at West Freeborn Lutheran Church. They lived in Ellendale, near Manchester, then near Chester, Iowa, before settling in Albert Lea in 1955. Alice worked at St. John’s Lutheran Home for 14 years. She was a long-time member of Grace Lutheran Church and active in Bible studies and Circle as well as teaching Sunday School and vacation Bible school. She was a member of Grandma’s Birthday Club for 48 years.

Prior to moving to St. John’s Lutheran Home, Alice enjoyed living at Senior Tower for 12 years. She liked crossword puzzles, making hand-made birthday cards, writing poems and hosting coffee parties. She was an avid Twins fan. Her family lovingly refers to her as their prayer warrior. She very much enjoyed spending time with her grandchildren and great-grandchildren.

Alice’s family would like to thank the staff at St. John’s Lutheran Home for their exceptional and attentive care.

Her family loves and misses her but knows she’s resting in the arms of her savior.