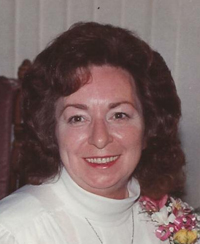 Barbara had worked for Slifka Sales and Miami Margarine in Albert Lea prior to retiring. She most recently lived in Springbrook, Wis., where she was a homemaker. She enjoyed gardening, working in the yard and her two dogs, Charlie and Spike. They were always together. She also enjoyed traveling across the United States on many occasions with her husband, Bill.

She was preceded in death by her parents and a step-son.