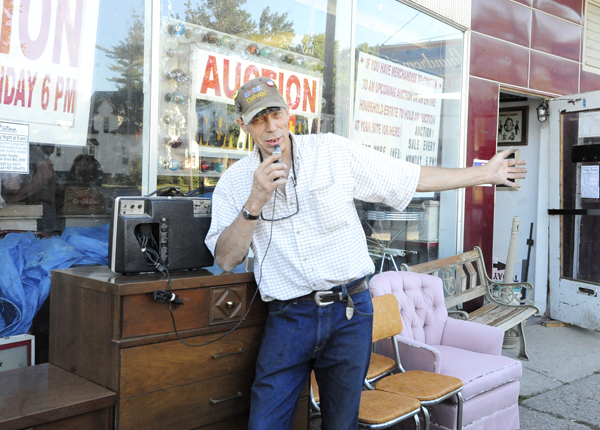 One dollar bid, now two, now two, will ya give me two? 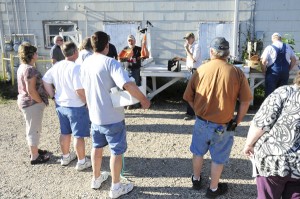 A crowd gathers outside Imperial Auctions last Monday to see what kind of deals they could get on anything from coins to lawn and garden tools.

Col. Eddie Rygh does every Monday night on South Broadway.

Rygh, the auctioneer at Imperial Auctions, has been doing the auction chant since he was 15 years old.

Rygh went to the World Wide College of Auctioneering in Mason City, Iowa, at 14 to become an auctioneer after hanging around his Uncle Earl as he auctioned off livestock for a living.

“When I was young, I’d do anything to get on the mic,” Rygh said. “I’d sell anything; church bazaar, bake sales and help other auctioneers just to get a foot in the door.”

At school, Rygh was taught how to do the chant, but said he learned it better when he’d practice on his own while feeding the cattle at home.

He described the learning process at school like an orchestra. The teacher would conduct the class as they started out slow and moved toward a faster chant. He graduated from the school, but said he took more away from making his own opportunities.

Rygh said being a caller was his calling in life and he enjoys working the crowd, especially when he was working as a ringman.

The first place Rygh had his own auctioneering business 25 years ago is in the building that is now The Rock. From there, he had a place in Hayward and four years ago, he moved back into Albert Lea to be more local.

Years ago, Rygh said there was a lot more interest in live auctions.

“There used to be 100 people fighting over stuff,” Rygh said.

But, with the advancement of online auctions Rygh said live auction attendance has dropped. Rygh keeps on chanting though and said he has learned the names of each and every one of his bidders.

“In our crowd, there are a bunch of die-hards,” Rygh said. “They’d miss church before they’d miss this.”

Rygh said he scopes out antiques, collectibles, tools, hardware and clean furniture to put on the auctions because that’s what people are looking for.

He said it is important to sort the items that are for sale because people want to know what they’re taking home, not just a box with a bunch of random items they don’t know what to do with.

In a 1990 edition of the Collectors Journal, Rygh was quoted predicting something that has become true today.

“I feel the days of kicking grandma’s estate items off the bale rack are coming to an end,” the article stated. “Auctions will continue to become more specialized and move indoors out of the weather. The auctioneer will be on a stage with the crowd seated.”

To stay with the times, Rygh does a little of both. Carrying around a portable microphone, he starts the auction outside and makes his way indoors where people can sit down.

The indoor auction makes it possible for Rygh to do his auctions even through the winter. In fact, he said winter is busier than the summer usually. He said he hasn’t missed a Monday for the last four years except for when they land on holidays.

Rygh said he would love for more people to join his crowd of die-hards. The auctions begin at 6 p.m. and usually last a couple hours.