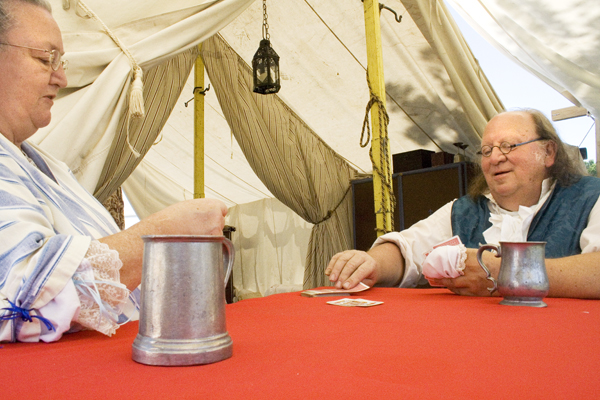 Chuck and Kitty Molenda, re-enacting Ben and Deborah Reed Franklin, play a game of gin Tuesday outside their tent at the Freeborn County Fairgrounds. The Molendas said while gin was not a popular game in the 18th century, the Franklins probably would have been playing whist. -- Sarah Stultz/Albert Lea Tribune

One of America’s Founding Fathers is at the Freeborn County Fair this week.

Dressed in clothing representative of the 18th century, Chuck Molenda of the northwest suburbs of Chicago is re-enacting the life of Benjamin Franklin.

He and his wife, Kitty, who re-enacts as Franklin’s wife, Deborah Reed Franklin, can be found just feet away from the entrance to the Freeborn County Fair from Bridge Avenue. 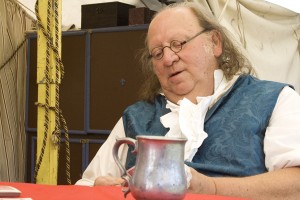 Ben Franklin, re-enacted by Chuck Molenda of northwest Chicago, studies his cards Tuesday during a card game with his wife at what was the first day of the Freeborn County Fair.

“For 20 years, we’ve been trying to prove to people how amazing he was,” Kitty said. “He was a community man.”

Besides his role in helping America gain its independence from England and helping draft the Declaration of Independence in 1776, Franklin was an inventor, a printer, a musician, an author and a family man, the couple said.

“The more we researched him, the more fascinated we became,” Kitty said.

They’re so fascinated with the Franklins that they’ve been re-enacting the parts for 22 years.

This is their first county fair.

While the Molendas will not appear on stage at the fair, they are part of the entertainment. They welcome people to come up to them in their tent and ask questions.

The couple said Franklin met his wife when he was 17 years old. They were married through common-law marriage for 44 years and had three children.

Chuck said Franklin was a curious man, with more than 200 inventions, though he never had a patent for any of them. Some of his inventions included the double glass spectacles, a long arm (a pole with a grasping claw at the end), a pair of pliers for pulling teeth and the first flexible catheder, to name a few.

He said Franklin didn’t do his work for the federal government, including his work on the Constitution and the Declaration of Independence, until after he reached the age of 70.

“His mom thought he’d never make anything of himself,” Chuck said.

The Chicago man said he first realized he could re-enact as Franklin, a Philadelphian, after he grew out his hair for a film that never came to fruition.

“I said, ‘You look like Benjamin Franklin,’” Kitty said.

From that point on, for about three months out of each year, the Molendas dress up as the Franklins. They perform at re-enactments, parades and in front of groups as asked. They have been a part of Albert Lea’s Big Island Rendezvous & Festival.

Chuck is a semi-retired school bus driver. Before that he owned a medical transport company.

He and Kitty have been married for 44 years and have two sons, eight grandchildren and two great-grandchildren.

They also volunteer with the Boy Scouts in Carpentersville, Ill. The couple encouraged people to find something they are passionate about and to pass on their knowledge of it.

“Tell your kids, your grandkids,” Kitty said. “Let’s keep passing it on.”

The Molendas were funded at the fair through Minnesota’s Clean Water, Land and Legacy Amendment.