An Albert Lea resident with prior experience at both the county and township levels said he’d like to have a voice now on the city level as mayor.

Keith Porter Sr., of 1634 Massee St., moved into the city from Albert Lea Township about a year ago.

He is one of three candidates vying for the office. 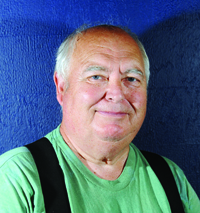 “Some things I like to have a voice in,” Porter said. “I realize one person can’t do it, but with a cooperation of the council I could make a few suggestions.”

He said if he is elected he will do the best job he can and will be available in person or on the phone.

Though he is not knocking on doors, he is interacting with people and spreading his name through his political signs. He has made a portable billboard on the back of his pickup and is parking it in a different place each day.

Others who filed for mayor were incumbent Mayor Vern Rasmussen and John Severtson, a former city councilor. Their names, along with Porter’s, will appear on the ballot.

The following is some information on Porter’s background, along with his viewpoints on several issues. 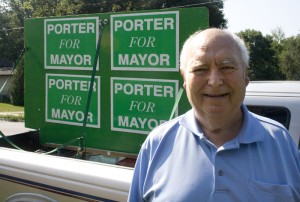 Albert Lea mayoral candidate Keith Porter Sr. stands in front of a portable billboard he has made in the back of his pickup promoting himself for the mayoral seat. -- Sarah Stultz/Albert Lea Tribune

He has also once ran for county auditor and once sought the office of state representative as a member of the Independence Party.

In all, this will be his 10th time running for office.

He and his wife, Dorothy, have four grown children, 10 grandchildren and six great-grandchildren.

He is the former co-owner of Porter Sanitation Co., the Palace Bar in the late 1970s, Albert Lea Fire & Safety Co. and an Albert Lea picnic table company.

His most recent job was at Interstate Motor Trucks as a driver and supervisor, but he is now retired.

Porter said he thinks the Albert Lea Economic Development Agency is doing the best it can to bring development to the city.

However, he noted he is not in favor of giving things away to new businesses.

“If anybody wants to come to town they should have to pay (taxes) like everybody else,” he said.

He noted it is important for people to remember that when they’re trying to get businesses to come into town that they’re competing against every other city in the country.

Whoever is elected as mayor this November will likely be involved with whether to renew the half-cent sales tax that was designed to clean up local lakes. Though the community will have to vote on the issue in a referendum, the city would have to work out an agreement with the Shell Rock River Watershed District.

Porter said he is not in favor of renewing the half-cent sales tax because he doesn’t think the watershed district, which oversees the money, has completed projects fast enough to show that the tax has been worthwhile.

One of the main things that needs to be done is that Fountain Lake needs to be dredged, he said. This has not yet taken place.

Outside of fixing the infrastructure on Broadway Avenue, Porter said he is not in favor of adding any fancy amenities such as the three plazas that are proposed.

He said money plays a large part in his opinion, but even if the renovations were free, he still wouldn’t care for it, he noted.

Porter is adamant that the police and fire departments in the city be fully staffed.

“I’ve talked to a lot of people,” he said. “We just have to have a good fire and police department. That’s all there is to it.”

He noted he thinks the city should have never hired a consultant to review the fire department and questioned the money spent on this process.

“I think they should have just left the Fire Department alone,” he said.

Porter said he does not support the National Vitality Project, which came to Albert Lea in 2009 as a pilot project and has continued on a local level.

“It’s the biggest laugh I’ve ever seen,” he said.

Porter said he is in favor of leaving the mayoral term as two years instead of switching it to four years as proposed on this November’s ballot.

“It’s been that way forever,” he said. “Most people were happy with two years.”