Championship comes down to father and son 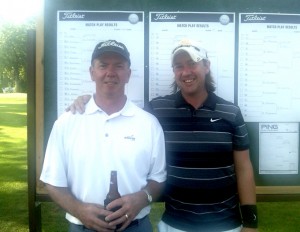 Jeff and Mike Elseth stand together after a club tournament at Green Lea Golf Course on July 28.

In its final round, a club tournament that took place July 28 at Green Lea Golf Club came down to a duel between a father and son.

“It was an Elseth versus Elseth matchup during the championship finals where I ended up coming out on top in the deal,” said Jeff Elseth, the owner of Green Lea and the father of Mike Elseth, his final round opponent.

Jeff said the tournament was match play so the two were really playing each other instead of the entire field.

“It was a neat moment and a unique situation,” Jeff said.

Mike said everyone that came to play was vying to make the semi-finals and finals and to make it to the finals and be matched against his dad was pretty special.

“I knew exactly what he was capable of and he kind of knew that about me as well,” Mike said. “I have to give Jeff credit, he hit some unbelievable shots, and he deserved to be the winner that day.”

Mike said it was tough to try and win and root for his opponent at the same time.

“It was a fun experience and something that may never happen again,” Mike said.