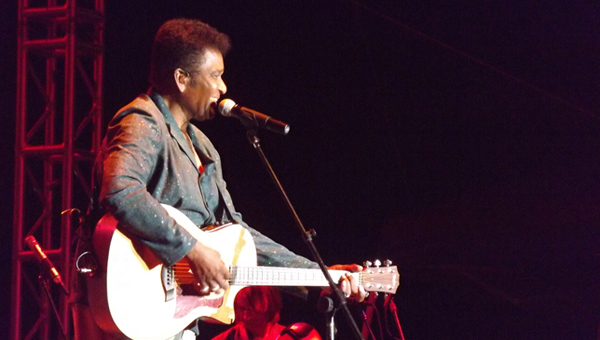 Fans Friday night at the Freeborn Country Fair welcomed country music legend Charley Pride. At 8:30 p.m. Pride took the stage but at 8 p.m. most seats in the grandstand were filled.

Audience members were flocking to one reserved seat in front. That was the seat of Karen Albertson from Missouri. Albertson’s husband was in the military with Pride and had a book with signed photos of Pride when he was in the military. There was also one head shot he had signed and a photo of Albertson, her son and Pride taken in 1991. Albertson’s young grandson was at the concert with her and excitedly pointing at the photo saying it was of his dad and Pride.

“I don’t think he knows Charley’s songs because he’s only 5!” Albertson said.

Before the show Albertson had talked to Pride backstage and showed him the book she brought with. Pride signed the book again and told her he lost his. When Pride asked if he could buy her copy, Albertson politely refused the offer. Her husband passed away in February 1992, and she said she’d like to keep the book. 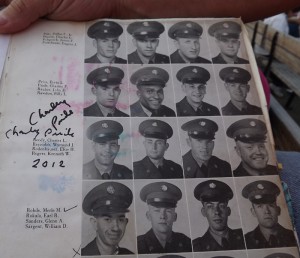 Before the Charley Pride concert Friday night, Karen Albertson was showing audience members this book with Pride's military photo he signed. Albertson and Pride met before the show; he asked to buy the book from her and she turned the offer down. -- Kessa Albright/Albert Lea Tribune

Albertson closed her book as members of Pride’s band took the stage in their gray, short-sleeved, collared shirts. Static and sounds of an old radio being dialed blasted through the speakers. An announcer bellowed “Ladies and gentlemen, pride of America, pride of country music — Charley Pride!” The crowd stood up and cheered as the legend himself walked on stage, waving, smiling and blowing kisses.

“It’s good to be back in Blue Earth,” Pride said as the audience let out confused laughter mixed with faint booing. “Hinckley? Oh! Albert Lea! … I’m not lost I’m just seein’ if you guys are listening!”

Pride opened the show by singing “The Happiness of Having You” while smiling and shuffling around stage while he wasn’t singing. He then sang a crowd favorite “Is Anyone Going to San Antone?”

“You remember that one, dontcha?” Pride asked the audience and got cheers in response.

“I really like it, and I hope you’ll remember it,” Pride said before singing “My Eyes Can Only See as Far as You.”

And the audience did remember. They closed their eyes and sang along, remembering.

A few songs later Pride talked about his wife, Rozene, and the special ringtone he has for her. It’s the song “Someone Loves You, Honey,” and Pride belted out the song for his wife. 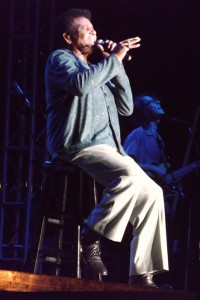 Charley Pride's performance turns from upbeat to sentimental when he sits on a stool to sing "My Eyes Can Only See as Far as You."

About halfway through the show, Pride paused to talk about his upcoming projects. He published an autobiography in 1994 and dedicated it to his mother who passed away at age 47.

“She’s been watching me from up there,” Pride said.

Pride released a gospel album last year called “Choices” and talked to the audience about the songs on it. He also mentioned a Jim Reeves tribute album he’s working on.

He continued the performance with “Mountain of Love” while the audience bobbed their heads. While dancing, Pride fake limped, pretending his knee gave out, which got laughs from the audience.

“Woo!” Pride said after the song. “That took a lot of breath!”

He gathered up momentum to belt out “Chrystal Chandeliers” with the help of the audience singing along.

“Y’all sound good,” Pride said to the singing audience. “You helped me out.”

He then dedicated “America the Great” to the soldiers overseas. The song received a standing ovation.

Next was a medley of four different gospel songs including “I’ll Fly Away.”

Pride then had a funny, forgetful moment when he started singing a song then immediately said “We might do that one later.” A member of the band replied “We already did,” and Pride, confused, said “Oh, we did?” and laughed with the audience.

The next medley was a tribute to some of Pride’s country music influences and friends. He sang “My Woman, My Woman, My Wife” by songwriter Marty Robbins. Then “Hello Darlin’” for childhood neighbor Conway Twitty. Then Pride sang the classic song “Act Naturally” for Buck Owens. 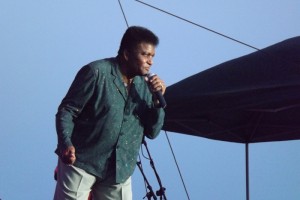 Pride has a way of changing the pitch of his voice drastically. He said this and sang in a high, falsetto voice at random moments through the show. He also sang in a deep tone at the ends of songs.

Pride took out a guitar to sing and to play “Kiss an Angel Good Morning.”

“Here’s the biggest single I’ve ever had,” Pride said while the audience anticipated the song.

The show closed with “Elijah” then “(In Them Old) Cotton Fields Back Home.” Pride thanked the entire crew, the band and said “God bless,” to the audience.

Having a legend like Pride play at the Freeborn County Fair was a blessing to Charley Pride fans in the county. He is not only a legendary country singer but an African American icon. Pride played baseball with his brother Mack “the Knife” Pride. The brothers were two of 30 African American baseball players to be drafted to Major League Baseball in recognition of their achievements. Pride was part of The Texas Rangers, and Mack was with the Colorado Rockies. Pride has a star on Hollywood Boulevard, has sold 7 million albums and has had 39 Billboard Chart hits.