Jason Gray is slated to perform acoustically at 7 p.m. Doors will open at 6:30 p.m.

About 50 tickets are remaining and will be available at the door. Tickets are $20.

Gray certainly knows what it means to be in the music industry and is working his way upward. But even with his rising fame, he has stuck to his roots and is giving all credit to God. 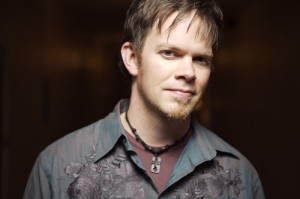 Jason Gray is a contemporary Christian singer and songwriter. He is scheduled to perform acoustically at the First Baptist Church in Clarks Grove today at 7 p.m. -- Submitted

Gray was born on Jan. 18, 1972, and grew up in southern Minnesota. With all the rural towns and extreme seasons, he’s been glad to call it his home.

“It’s an honest place with a good work ethic,” Gray said. “My family resisted a move to Nashville because we love it here.”

He grew up on the road with his mother’s bar band. His mother had a profound experience when he was in fourth grade and went from singing in bars to singing at tent revivals. He said he knew he was meant to make music but struggled with a speech impediment and wondered how that could all fit together.

“The main thing is to stop caring about it; hardly anyone else does,” Gray said. “The more afraid we are of our imperfections, the more power they have over us. The less we care about them, the more they fade to the background of who we are.”

Stuttering is still an obstacle in his life, but it can’t be heard in his music. He’s been grateful to discover it as a blessing rather than a hindrance.

“It buys me the opportunity to talk about weakness and brokenness with my audiences in a way that I couldn’t if I didn’t have such an obvious weakness myself,” Gray said. “I get to be the one who reminds them of the scripture that says, ‘It’s in our weakness that God’s strength is perfected.’”

Gray has been active as a musician since 1990 and released four independent records before signing with Centricity Music in 2006. Centricity released his first major label record “All the Lovely Losers” in 2007.

For Gray, there’s no such thing as a typical day. While others may get bored with a monotonous routine, Gray enjoys the perks of traveling on the road. He sets up, does a show, tears down and meets people from all different walks of life.

“Jason is very laid-back and loves to get to know people,” said the church’s worship leader Jeff Schei, who was in charge of booking the concert.

Long days also come along with Gray’s tour, and when a new record is forming, it includes extended periods of writing and singing in the studio. Priorities are anything but jeopardized, though.

“When I’m home, I try to just be home and available to my family,” Gray said. “I’m getting better at that, and it’s my favorite!”

In his latest album, “A Way To See In the Dark,” Gray sings about the pain of feeling vulnerable in “No Thief Like Fear” and “The Sound Of Our Breathing.”

Gray’s website says he has worked to combine internal revelations and eternal truth to make music that can speaks to broken souls in a broken world. His music has been described by critics as personal yet universal.

“When we forget that we are God’s beloved, we become the worst version of ourselves,” Gray said of the song’s message. “If we doubt our worth, we go looking for worth in the worst places, but when I remember that I’m loved, I become the best version of myself.”

“I Will Find A Way” is the song of his that speaks the most to him. He said it tells the story of how God comes to us, looking for a way to disarm our defenses against him. It also tells how he keeps searching until he finds a way to reach us because he wants to heal us with his love.

Gray said that if he could tell people one thing he stands for and focuses on improving every day, it’s loving better.

“Not wishy-washy love, but biblical love,” Gray said. “The kind that demands your whole life.”

He has worked with producers that worked with artists like Brandon Heath, Sanctus Real and Tenth Avenue North. He has also toured with artists Jeremy Camp, Matthew West, Shawn McDonald and Mark Schultz, among others. He wrapped up the Make a Difference Tour 2010, a World Vision-sponsored tour, with Third Day, TobyMac, Michael W. Smith and Max Lucado.

There are rewards that comes with dedicating his life to something bigger than himself. He quoted a line from the 1981 movie “Chariots of Fire” when Scottish athlete Eric Liddell says that when he runs, he feels God’s pleasure.

“I feel that when I’m sharing my songs with a group of people,” Gray said. “Like I’m right where I was meant to be.”