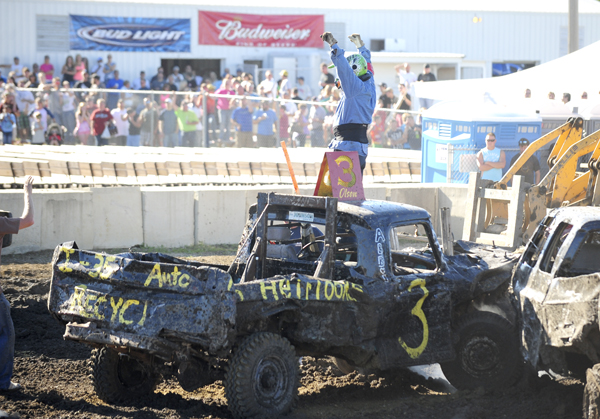 Dustin Olson stands on top of his truck on Sunday after winning the truck class in the demolition derby. -- Brandi Hagen/Albert Lea Tribune

Fair-goers packed into the Grandstand on Sunday to watch 52 derby cars smash and crash until there was just one left running in each class. 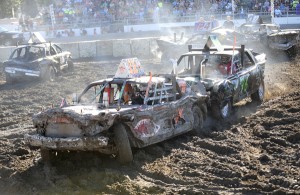 Jaime Sonnek of Faribault rear-ends Colton Neuhalfen of Blue Earth during the 2012 demolition derby at the Freeborn County Fair. Sonnek and Neuhalfen were the last two cars running in the full-size class.

There were five classes including the usual full-size, compact, trucks, powder puff with the addition of a new mini class.

Allowed in the mini division were minivans, SUVs and compact trucks.

“It was really good. I’m sure we’ll do it again next year,” said Paul Nielsen.

Nielsen, the promoter for Masters of Disasters, said it was just another event for the crowd to enjoy. He said the crew has a mini class when they go to Austin, so he knew it would go over well.

The crowd grew impatient as the show ran 20 minutes late because of late entries and inspections, but sat tight and watched until the show ended just after 6 p.m. 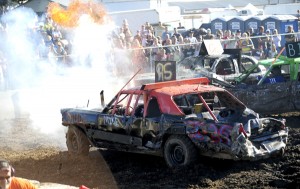 Mike Anderson’s car emits smoke and flames during the full-size class Sunday at the derby.

In all of the classes, the first-place winner was also named hardest hitter.

“Hardest hitter is like a first-place trophy in itself,” Neuhalfen said. “If you’re the hardest hitter, that’s a lot of bragging rights right there. If you win on top of that, that makes everything even better.”

He said he has won hardest hitter two other times this summer and took first place in 10 of his 15 runs.

Neuhalfen, who won first-place last year too, plans on running in the 2013 derby at the Freeborn County Fair to try and make three in a row.

There were five entries in the powder puff class and it was won by Kristin Evans of Stacyville, Iowa. Twenty-one-year-old Evans said it was only her second derby ever and after getting pinned to the wall and thinking she was out right away, the win was exciting.

Jim O’Byrne of Albert Lea won out of nine vehicles in the minis, followed by Brady Flatness of Wells in second and Tony Olson of Brownsdale in third.

There was also nine entries in the compact class and it was won by Ryan Schulz of Albert Lea.

The truck class was the second biggest of the evening with 14 cars packed into the track. It was won by Dustin Olson of Glenville.

Olson said he entered to have fun and put on a show for the crowd. He said he couldn’t hear them cheering, but, “When you stand on top of your hood and they all light up, that’s a really good feeling.”

The final run of the night was the full-size class, which ran 15 cars.

It was the only class where the run was red-flagged for fire. Both drivers, Mike Anderson of Glenville and Kelly Ellingson of Glenville, jumped out of their cars, let the flame be extinguished, and climbed back in to give it another go.

Trophies were given to the top three finishers.