Gene and Ann Arnold of Albert Lea and Roger and Deb Kuhlman of Lewisville are proud to announce the engagement of their children, Allison Arnold and Ryan Kuhlman. 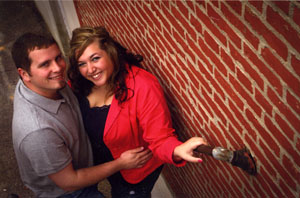 Grandparents of the bride are Gene and Wanda Arnold of Carlos and Jack and Orlene Woodside of Albert Lea.

Grandparents of the groom are Lil Kuhlman and the late Merrill Kuhlman of Lewisville and the late Leo and Marian Caven, of Amboy.

Alli is a 2006 graduate of Albert Lea High School and a 2010 graduate of South Dakota State University with a Bachelor of Arts degree in sociology and human resources. She is employed at Tecta America in Mankato as a national sales administrator.

Ryan is a 2006 graduate of Truman High School and a 2010 graduate of South Dakota State University with a Bachelor of Science degree in agronomy. Ryan is employed at Genesis Co-op in LeCenter as a sales agronomist.

Alli and Ryan plan to wed on Sept. 8 at First Lutheran Church, Albert Lea, with a reception and dance to follow at America’s Best Value Inn in Albert Lea.