The funeral service for Ethel J. Peterson of Albert Lea will be held at 2 p.m. Tuesday at Bonnerup Funeral Service, Albert Lea. The Rev. Curtis Zieske will officiate. Interment will be in East Freeborn Lutheran Cemetery. Visitation will be at the funeral home one hour before services. 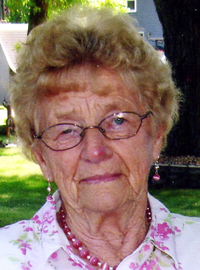 A Freeborn County resident all her life, she attended rural country school.

As a young girl she enjoyed skating on area ponds, taking the horses to town and having fun on the farm with her brothers and sisters.

She married James Westergaard on June 3, 1939, at the First Lutheran Church in Albert Lea. To this marriage five children were born: Ed, Bob, Del, Janet and Roy.

Throughout her life she was a very hard worker and loved her role as mother and homemaker.

She was a member of the Eagles Club and the VFW Auxiliary.

Ethel was preceded in death by her parents, brothers and sisters, and former husbands: James Westergaard and Clifford Peterson.

Ethel will be fondly remembered as a very loving and caring woman and will be greatly missed.