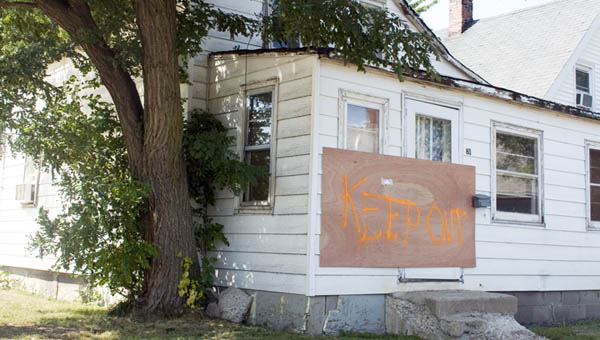 A large "Keep Out" sign could be seen over both the front and back doors of 68 First Ave. NW in Wells Thursday afternoon after a fire broke out at the residence. While firefighters were battling the blaze they saw marijuana plants, which were later confiscated. -- Sarah Stultz/Albert Lea Tribune

WELLS — Firefighters battling a house fire Thursday morning in this community came upon an unexpected surprise when they found more than two dozen marijuana plants growing in the basement. 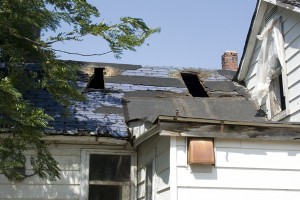 Damage is visible on the back of a house at 68 First Ave. NW in Wells Thursday afternoon.

Wells Police Officer Eric Neubauer said firefighters were dispatched to 68 First Ave. NW, behind the Wells American Legion, at about 9:15 a.m. While searching the attic, main floor and basement for the spread of fire, a firefighter noticed what were described as “shrub-looking plants” in the basement, Neubauer said.

Firefighters notified the Wells Police Department, and after firefighters were finished fighting the fire, police obtained a search warrant for the house.

In all, officers seized 14 mature, 4-foot-tall potted plants, along with 17 seedlings that were about a foot tall. 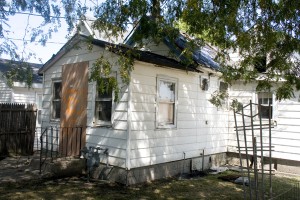 A “Keep Out” sign covers the back door of 68 First Ave. NW in Wells Thursday afternoon.

Neubauer said as of Friday afternoon no had been arrested; however, charges are expected to be filed.

The department did not release the name of the owner of the house but did say the owner occupies the house.

Wells Fire Chief Mike Pyzick said though there is not much visible exterior damage from the fire, the house is considered a total loss.

A representative with the State Fire Marshal’s Office has declared the cause of the fire to be electrical in nature, Pyzick said. The fire is believed to have originated from a shorted wire in the ceiling above the kitchen sink.

No one was home at the time of the blaze.