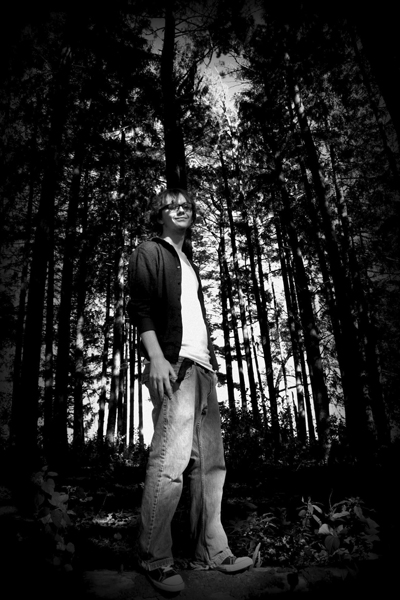 Submitted Ethan Braden stands before trees in Oregon he worked to defend. --Submitted

ALDEN — A fund has been set up to commemorate a teenager from Alden who died while spending this summer working to stop the devastation of forests in Oregon. 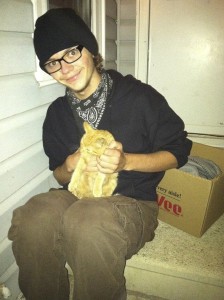 Ethan Braden last fall in Alden holds a stray, skinny, sick kitten he found named Ollie. The feline became the family pet. He is on the front step of the family’s home. -- Submitted

Ethan Wyatt Braden of Alden died July 5 at Fall Creek Reservoir in Lane County, Ore., while enjoying some recreation time. He plummeted from a ledge, hit his head on a rock and was found by divers 54 feet beneath the water’s surface. He was 17.

He was working for the Cascadia Forest Defenders, based in Eugene, Ore. The organization describes itself as “the last line of defense between the forest and the sawmills.”

Called the Ethan Braden Memorial Fund, it now appears on the organization’s website: www.forestdefensenow.com. The goal for the fund is $1,000, and there is $355 raised. Funds raised will be donated to the Cascadia Forest Defenders and other organizations that save Cascade Range forests.

His mother, Alden resident Sandy Clover, said while he was in the Pacific Northwest, Braden was part of a group that helped to suspend timber operations in marbled murrelet habitat. This action provided key time to enforce the Endangered Species Act, she said.

Clover said Ethan loved animals, which is why he was in Oregon. He had been a vegan since age 13, and a vegetarian for a spell before that.

“He would bring home lost, stray and wounded animals because he couldn’t stand to see them hurting or hungry,” she said.

Ethan, his 15-year-old sister Chloe and their mother moved from Mankato to Alden in 2006. He went to school in Alden from seventh to 11th grade, when he switched mid-year to the Area Learning Center in the Albert Lea School District.

He was born in Sacramento, Calif., and the family has lived in many places: Bend, Ore.; Seattle, Ripon, Wis., and Corpus Christi, Texas. He also enjoyed horoscopes, music and keeping track of politics.

Even though the family moved away from Mankato, he retained friends there, and it was with some of them that he journeyed to Eugene to work for the Cascadia Forest Defenders. One was Cameron Kennedy, who wrote the eulogy for Ethan.

“Ethan was one of the most loving human beings I have ever met,” he said. “You could see it in the glow of his smile as he spoke. He held an unusually staunch loyalty and love for his family and friends but it certainly didn’t stop there. Ethan also held an unwavering love for animals. He couldn’t bear the idea of hurting them so much so that he refused to eat or wear any animal products.”

Kennedy said Ethan wanted dearly to help people, too: “When I was in Chicago with him it was a struggle to keep him from giving all of his money to those in need on the street. I reminded him on several occasions that we were almost as broke as the people he was giving money to but he would shrug it off and jump at the next opportunity to help someone else in need.”

Clover reflected the same comments. She said Ethan would place money in the Salvation Army kettle whenever he saw one. He would gather change in the car and give the coins to people who panhandle in Albert Lea in the Walmart area.

“If more people would be like him, the world would be a better place,” his mother said.

She said his sister and his dad, Brandon Jukulen, miss him and said everyone sees reminders of Ethan: the empty place at the dinner table, a shower hook without a towel.

The family played practical jokes on each other, things like a wire body with clothes and a mask posed inside Ethan’s bedroom door. They would go on hikes at state parks. Last Easter, the mother and father took the two kids on an Easter egg hunt all over Freeborn County using GPS devices to find hidden plastic eggs.

“We will miss having him embark on these adventures with us,” she said.

Clover said Ethan set an example for others to follow. She said it brings her peace knowing he had done so many things with his short life.

“I know that at the time passing he was truly happy and fulfilled being able to do something he believed was right,” Clover said.