Memorial services for Gerald “Jerry” Dimit, 80, of Albert Lea, will be at 10 a.m. Friday at Hollandale Christian Reformed Church. The Rev. Michael Bentley will officiate. Military honors will be accorded by area veterans organizations. Visitation will be from 4 to 7 p.m. Thursday at Bayview/Freeborn Funeral Home and one hour prior to the service at the church. Online condolences are welcome at www.bayviewfuneral.com. 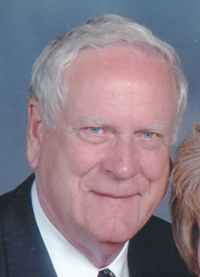 Gerald Goodrich “Jerry” Dimit was born on June 13, 1932, to Charles and Erma (Goodrich) Dimit in Grinnell, Iowa. He grew up in Grinnell and graduated from Grinnell schools. In June of 1952 Jerry married Beverly Joanne Larsen in Newton, Iowa. The couple later divorced. Jerry worked for Maytag briefly before enlisting in the United States Army where he was in the military police serving in Germany. After his discharg Jerry moved to Austin where he was employed at Weyerhauser, drove for Austin Cab Company and attended Austin Vo-tech for auto mechanics. Jerry worked for the Austin Police Department from July 1959 to December 1983. After his retirement, Jerry worked for the Austin Ambulance as a manager until it was sold to Gold Cross. During this time he also drove school bus for 40 years. On June 29, 1991, he was united in marriage to Kathy Drenth at the Congregational Church in Austin. Jerry was also very active with and served on the board of the Red Cross. He taught CPR classes and also became a Charter Coach Bus Driver. Jerry and Kathy enjoyed wintering in Mesa, Ariz., where Jerry served as a deacon at the Maranatha Christian Reformed Church. He was also a member of the Congregational Church of Austin and the Hollandale Christian Reformed Church. Jerry was also an avid golfer and enjoyed spending time with his family. Blessed be his memory.

Jerry was preceded in death by his parents, Charles, Sr. and Erma Dimit and brothers: Charles, Jr. and Dennis Dimit.