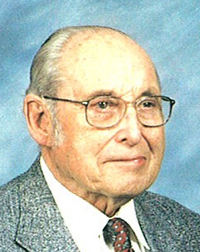 A funeral service will be at 11 a.m. Tuesday at Hosanna Lutheran Church with the Rev. Dan Weise, the Rev. Steve Kosberg,and Dave Zeller officiating. Visitation will be from 5 to 7 p.m. Monday at Hosanna Lutheran Church and will continue one hour prior to the service. His remains will be laid to rest at Pilgrim’s Rest Cemetery in Mankato, in company with all of his grandparents; parents; wife, Yvonne; sister, June Sharits; granddaughter, Nicole; and so many other friends and relatives. Landkamer-Johnson-Boman Funeral Home is in charge of arrangements.

Glen was born to Albert and Paula Timmerman, residents of Mankato, on March 22, 1917. He graduated from Mankato Senior High in 1935 and attended Bethany Lutheran College the following year. He was one of the young men that left Mankato with the National Guard in January 1941, 11 months prior to Pearl Harbor. He was serving in the Army in Alaska at the time of the Japanese invasion of our Aleutian Islands and later in Europe where he participated in the Battle of the Bulge. He served a total of 24 years active and in the reserves. He retired as an Army colonel. When he was home on leave in December 1943 he married his sweetheart, Yvonne C. Lubitz of Odin. Their marriage was ultimately blessed with four sons, Bruce, Craig, Lee and Scott.

After the war he went to work for Truth Tool Company in Mankato. He and his wife were some of the very first to build a home in the Dolph Heights area of Mankato, some years before Mankato State moved up there. When Truth Tool moved to Owatonna he accepted a position with Queen Products of Albert Lea, where he became production and inventory control manager for 18 years until his retirement in 1977. At that time they purchased a retirement home in Otter Tail County near Battle Lake where they lived for the next 20 years. They moved back to Glen’s home town of Mankato in 1997.

Glen was a hunter and fisherman enthusiast and loved to golf and bowl too. He was a devoted bridge player, which he had learned to play at the age of 16. He was a consummate gardener most of his life. Glen was an avid researcher of biblical history and wrote many books for his children as well as Bible studies he led during his later years. He had a life membership in both the American Legion and the Veterans of Foreign Wars.

He was preceded in death by his parents; wife, Yvonne in 1999; granddaughter, Nicole Timmerman in 2000; and sisters: June Sharits and Arlene Swanson.

Glen was a devoted Christian of the Lutheran faith all of his life. Memorials may be made to his congregation, Hosanna Lutheran Church or to Mankato Hospice for the great care and comfort given to both Glen and Yvonne.