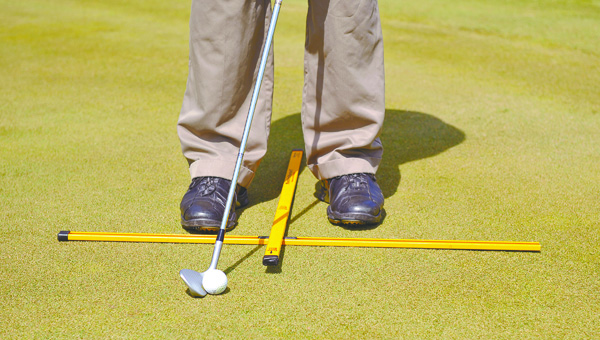 Photos and illustrations by Eric Johnson

Let’s face it: Golf can be a complicated sport. Swing thoughts pervert the brain while extremities form their own bad habits. But a major part of the game can eliminate your worries: Enter chipping.

It’s important to simplify the game and increase the odds of lowering scores, which is what PGA professional Tom Vizina of The Oaks in Hayfield does. He keeps it so simple 7-year-olds can learn 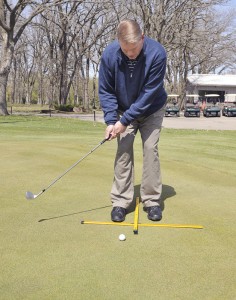 this technique, and it can be always effective if done correctly within 25 yards.

1. Use shoulders and arms, not hands and wrists. Vizina’s chipping swing glides through like a pendulum: It eliminates excessive moving parts. He suggests letting the shoulders swing the arms like a pendulum while everything else remains still.

“To make your stroke, all you do is make your putting stroke,” Vizina said. “You want an arm and shoulder swing, not a hands and wrists swing.”

2. Vizina always plays every chip off of his back foot (as a right-hander, his right foot) with his hands about four inches in front of the ball at address. Instead of moving the ball toward his left foot with each longer iron, he leaves the ball in the same spot.

“Basically, you are going to let the loft of the club determine how high the ball is going to go in the air,” he said. “It’s going to roll. It’s just how much roll do you want?”

Letting the club do the lofting instead of forcing hands and wrists to make uneasy movements eliminates several mistakes, as well. Vizina finds that playing the ball off the back foot eliminates the risk of chunking the ground or blading the ball. Furthermore, using an iron or wedge that allows the ball to hit the green and get rolling eliminates guesswork.

“The theory is, it is much easier to control the ball rolling than it is flying,” Vizina said.

3. Think tempo. Vizina pays so much attention to tempo that some onlookers laugh and think he’s listening to music while practicing. But that’s not “We Will Rock You” he’s listening to; it’s the constant ticking sound of a metronome, or pendulum. To hit the ball farther, Vizina simply takes a little bit longer backswing; however, his tempo always remains the same.