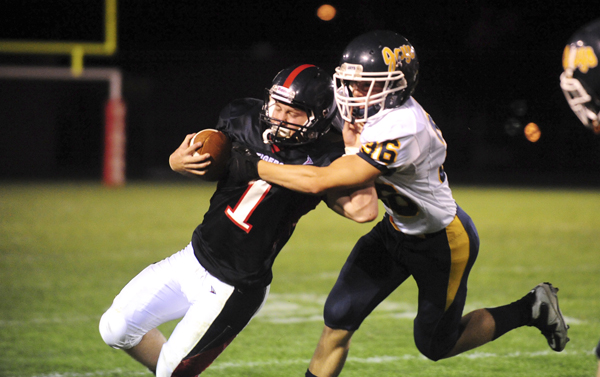 The Albert Lea football team snuck in one touchdown before losing 42-7 to Waseca Thursday in the first game of the season.

Ethan Abben made a 35-yard touchdown with 1 minute, 21 seconds remaining in the game to put the Tigers on the board. The extra point was kicked by Nick Kromminga.

“Ethan takes it the distance and that’s important to not have a zero on the scoreboard,” said Tigers head coach Max Jeffrey. “Fourty-two to seven, but we’re going to improve.”

Another big play by the Tigers was made by Triston Westerlund when he sacked the quarterback with 1:25 remaining in the second quarter.

“Triston is a fantastic athlete,” Jeffrey said about the sophomore player. “He is so young right now and there’s so much football he’s got left to play. I just can’t wait to see once he gets going.”

Jeffrey said he and the refrees both couldn’t believe the score difference was so far apart because the boys played better than that.

Waseca scored two touchdowns in the first quarter and both kicks good for the extra point for a 14-0 lead.

In the second quarter the Bluejays scored after just two minutes of play for a 21-0 lead going into the half.

During halftime, Jim Gustafson was presented a sweatshirt and two plaques for the dedication and renaming of Hammer Field to Jim Gustafson Field. Mayor Vern Rasmussen also declared that Aug. 30 will be Jim Gustafson Day in Albert Lea.

Gustafson was an athletic director at Albert Lea High School and the head coach of the football team beginning in 1956. Gustafson led his team to a 46 out of 48 winning streak between 1966 through 1971 when he quit coaching.

Gustafson recognized former players in the stand and invited people to a gathering at Green Lea Golf Course so he could “tell more lies about the ball field.”

He thanked the alumni and businesses for the honor, especially the men who constructed the new field entrance.

After the ceremony, the game resumed with Waseca scoring two touchdowns in the third to lead Albert Lea 35-0 and one in the fourth to win by 35 points over the Tigers.