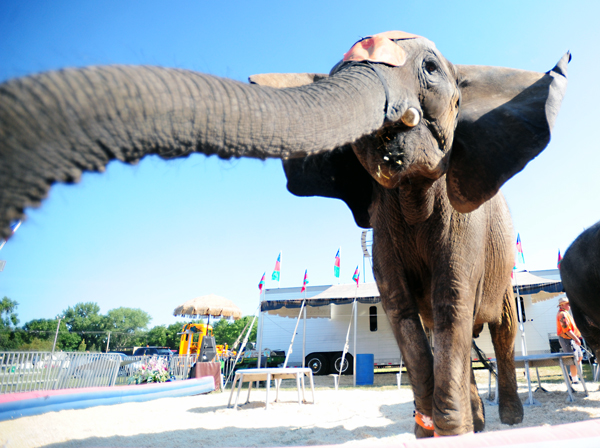 An elephant swings its trunk toward the audience during an Elephant Encounter show at the fair on Wednesday. The elephants are owned by Bill and Cindy Morris of Tampa, Fla. -- Brandi Hagen/Albert Lea Tribune

During Wednesday’s Elephant Encounter at the fair, elephants and their owners, Bill and Cindy Morris of Tampa, Fla., showed audience members how they could wave with their trunks, drink Kool-Aid, lay down and sit up like a baby.

The 51-year-old Asian elephant, Cora, was no baby when it came to weight, though. Cora weighs 9,100 pounds and Cindy estimated Shannon, the 31-year-old African elephant, was 6,500 pounds.

Cindy said she doesn’t like to call what the elephants do in the show tricks.

“People just get a chance to see their personalities,” Cindy said. “It’s just to see how agile they are.”

During the show, the audience saw how an elephant eat bananas and use a trunk to drink.

Bill coaxed Cora to drink Kool-Aid because if it would have been just water, she may not have done the trunk feat because she always has water available to her. After using her trunk like a giant straw to put the Kool-Aid in her mouth from a pitcher, Cora used her trunk like a vacuum to suck up the little bit that remained.

Cora must have needed a snack after quenching her thirst because while Cindy knelt on the ground preparing the elephants for another demonstration, Cora snatched carrots from her back pocket.

Besides eating, the elephants danced to music, sat on stools and on the ground and played the harmonica and tambourine. After the show Cora gave rides and smiled for pictures.

Cindy said it takes between 12 to 15 hours each day to work with the elephants and develop the relationship that they have with them. She said the elephant is not an animal where somebody else can just come take care of for a night; the elephants need Bill and Cindy.

Showing the audience the bond between the elephants and their owners, Cindy was carried around the show ring in the mouth of Shannon, and Cora showed how she could lay down.

Bill said elephants don’t usually lay down in the wild because it makes them vulnerable to animal attacks, but Cora did it because she was comfortable knowing he was by her side.

Bill said he grew up with Cora and took over doing shows with her after his father quit using her in his circus because he didn’t want to see her go to another circus or zoo where the environment wouldn’t have been appropriate for her needs.

He said he has owned up to three elephants at one time, his grandfather had owned up to seven and his father up to 19.

“I’ve got it in my blood, and I can’t get it out,” Bill said. “These elephants are so majestic and intelligent.”

Bill said what makes the show unique was that Cora and Shannon come from different continents and yet they act like mother and daughter making sure the other is safe.

As the show concluded, Cora was handed a piece of material and with her trunk she swung it around waving goodbye to the audience.

The Elephant Encounter will continue to have shows today at 5 and 7 p.m. and Friday and Saturday at 3, 5 and 7 p.m.