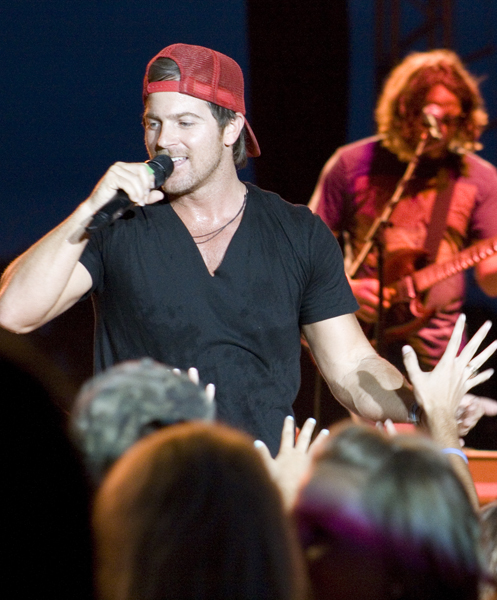 Members of the audience at the Freeborn County Fair Grandstand reach out to country musician Kip Moore Wednesday night as Moore performs. Moore interacted with the crowd throughout much of the night, at one point even jumping off the cement pillars in front of the stage into the audience. -- Sarah Stulz/Albert Lea Tribune

A relatively new artist whose debut album “Up All Night” was released earlier this year, Moore took to the stage early in front of the Grandstand while the threat of rain loomed overhead.

The rain never came, and the crowd couldn’t have been more pleased.

Bringing the audience to their feet, Moore kicked off the show with “Crazy One More Time” and “Beer Money,” both from his album.

He then performed “Mary was the Marrying Kind.”

Moore, a native of Georgia, said he moved to Nashville 9 1/2 years ago. He spent four years in Nashville before signing a record deal with MCA Nashville.

He said about nine months after he moved to Nashville, he performed for a producer, who told him he was OK, but ultimately told him to go back to Georgia. He dedicated the last verse of one of his songs to that producer.

Five songs into the show, Moore began to loosen up a bit, performing “Good Time Girl,” and dropping his guitar to focus only on vocals. Walking out on the cement blocks in front of the crowd, he reached down to touch a few hands of women in the audience and pointed out to others in the crowd.

“When ya’ll show up to support us like this, it means the world to us,” he said.

Though the audience was made up of all ages, a majority of it was teenagers or young adults — many women.

While singing his eighth song of the night, “Fly Again,” people began getting out of their seats and rushing to the stage, taking photos, dancing and reaching out to touch Moore.

With his next two songs, “Motorcycle” and “Break My Heart,” more and more people began to fill in the aisles of the reserved seating. Moore closed up the show singing “Back Down South” and “Hey, Pretty Girl.”

After singing his No. 1 single “Somethin’ ’Bout a Truck,” which has hit platinum in the United States, Moore left the stage only to be cheered back out for an encore.

He ran back out on stage to sing “Faith When I Fall (Free Falling),” and then said good-bye for the night.

The crowd raced to an area set up beside the Grandstand for Moore to sign autographs.