I had waited all week for Wednesday.

Right before I left for the Minnesota State Fair, I had been talking to my co-workers, and we were discussing who would be playing here at the Grandstand. The Kiss/Motley Crue concert on Wednesday came up.

I had mentioned to them that even if they do not come up to the fair to go the concert itself, this has always been the best people-watching day! Kiss always brings a packed crowd as well as their devoted followers. There were Kiss look-a-likes everywhere, just like I knew there would be! 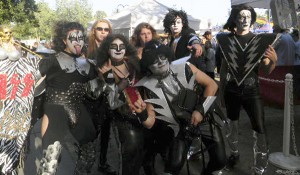 Facepainters had set up in front of the Grandstand just to accommodate all the fans who wanted their faces painted like Gene Simmons, Paul Stanley, Peter Criss and Ace Frehley. Some I found were even dressed in full costume.

As I was sitting watching and observing the crowd, I look up, and here comes Gene Simmons, the lead singer of Kiss himself! Now, I can not tell you if it was the “real” Gene or not, but if it wasn’t, he was his twin brother!

And the crowd sure believed it was him, because they went crazy. I didn’t follow him or the crowd to find out, but I think I am going to choose to believe I had my little brush with fame. 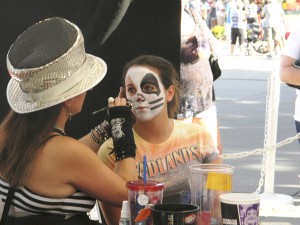 A facepainter on Wednesday paints the face of a girl to look like Kiss drummer Peter Criss.

How was the food today? Crab cakes were pretty good. (I had a coupon for them from my blue ribbon book.)

My husband and I had not had them yet. They were not as good as the red velvet funnel cake! This was just as good as it sounds, and better! The only thing about this, was that there was no coupon, and it was $8. So unfortunately, some things you just don’t get a deal on.

I have found the newest foods usually have no discounts, but you only live once, and it was big enough to share with five  people. For the higher calorie foods, it’s really a good idea to find as many friends as possible to share. There have been quite a few times my husband and I have had to get the assistance of his co-workers. But now I can say I tried it, and I can mark it off my state fair must-haves! 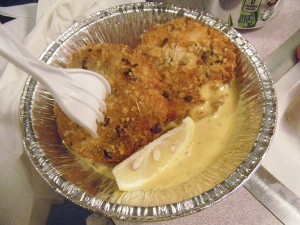 Who knew? Crab cakes are available at the Minnesota State Fair.

I think for tomorrow, I am just going to wing it when it comes to the food. I hear there is a salad on a stick. Really? Something healthy at the Minnesota State Fair? I’m curious.

So I am off for now to watch the nightly fireworks.

Talk to you soon!

Aymee Hanna is corresponding from the Minnesota State Fair for the Albert Lea Tribune.