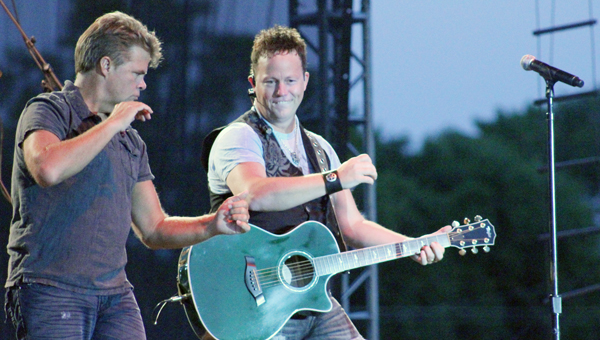 See a gallery of images here.

Lonestar, a country music group in its 20th year touring, wowed the crowd Saturday evening at the Freeborn County Fair with a mix of older hits, new songs and fun covers.

The band hit the stage promptly at 8:30 p.m. Saturday and kicked off with its hit “My Front Porch Looking In.” Then the band slowed it down for “You’re Like Comin’ Home.”

The slower tempo continued with “Tell Her,” a song about remembering to tell your woman that you love her. Lead vocalist Richie McDonald said they’re some words of wisdom that men should remember before cracking a joke.

“Tell her you love her or she’ll go see ‘Magic Mike,’” McDonald said.

The fun continued as Dean Sams, who plays keyboard, guitar and sings for the group, went down to the crowd and danced. He got $8 in dollar bills from women in the crowd and said he would be donating it to the group’s favorite charity: St. Jude’s Children’s Research Hospital.

Lonestar moved between slower songs and tunes with upbeat tempos throughout the show. Other hits they performed included “What About Now,” “Tequila Talkin’” and “Come Cryin’ To Me.”

McDonald told the crowd that the band had just recorded a new album that’s coming out in October. He performed a few songs, but didn’t name them. One of their encore performance songs “The Countdown,” was their newest song release.

Toward the middle of the show the band played some of its biggest hits like “Walking In Memphis,” and “Already There,” a song McDonald said he knows has meant a lot to military families. He said the band has been overseas to perform for troops and thanked them for their service. The song got a standing ovation.

Arguably the band’s biggest hit “Amazed,” got cheers from the crowd after just the first few bars of music were played. Many sang along to the lyrics.

The band finished with energy by playing cover songs like the Beatles’ “Get Back,” Pink Floyd’s “Another Brick in the Wall,” and Kiss’ “Rock and Roll All Night,” among others. The crowd was up on their feet and dancing and singing to the well-known songs.