Marian Ruth (Miller) Roisen, 84, a true world traveler, has traveled to her final destination. She passed through the heavenly gates into the presence of the only true God on Aug. 15, 2012, at 7 a.m. 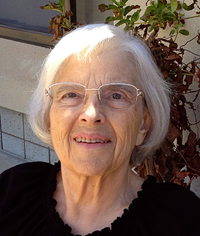 Marian was born Oct. 22, 1927, to the Rev. Paul Luther Miller and Marian Laura (Gaddis) Miller, in Chicago, Ill. This would be the first of her many homes around the globe. She was given many life experiences as her father served parishes in South Haven, Mich., Glendale, Calif., Sedalia, Mo., Cole Camp, Mo., Cedar Rapids, Iowa, and Flat Rock, Mich. At age 18, when Marian lost her mother, she decided she was going to skip college to help her dad raise her siblings. Her dad insisted she follow her plans and so she headed off to Concordia Teachers College in Seward, Neb. After two years she transferred to St Olaf College in Northfield where she met Kermit Roisen. They were married June 6, 1948. Upon graduation they moved to St. Paul where Kermit studied for the ministry. Upon graduation and a call to the mission field they headed to Paris, France, where they learned French before heading off to Madagascar where they served as missionaries from 1953 to 1967. While in Madagascar, Marian raised six children, taught English at the United States consulate, and fulfilled the duties of a pastor’s wife.

Upon returning to the United States, Marian helped to teach French at Dana College in Blair, Neb. When Kermit took a position as pastor in Millard, Neb., she became an accomplished salesperson for Avon and at JC Penneys. They moved to Milford, Iowa, for a five-year stint at Little Sioux Lutheran Church. In 1978, they moved to Clear Lake, Iowa, where Kermit became the associate pastor at Zion Lutheran Church. It was during this time that she used her sales skills to become a successful travel agent and eventually opened her own travel agency. She was able to travel all over the world in this capacity – Russia, Greece, China, Norway, Italy and many more.

Marian was a servant for Christ from a very young age. This continued even into her battle with Alzheimer’s. To the very end she was wandering around even with a broken hip stopping to calm someone or offering to set the table or help out one of the nurses.

Marian was preceded in death by her parents; a brother Paul, who continues as MIA from the Korean War; and one grandson, Benjamin Wood.

Funeral services will be held at Zion Lutheran Church in Clear Lake, Iowa, at 10 a.m. Monday with the Rev. Derik Yarian officiating. Interment 1 p.m. at the Emmons Cemetery.