Chris Karge, a 22-year-old Mixed Martial Arts fighter from Albert Lea, competed in his first ever title fight at the St. Croix Casino in Turtle Lake, Wis., on Aug. 18. 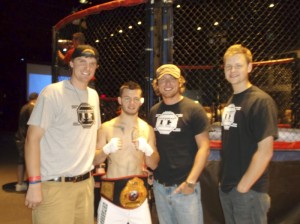 Karge didn’t just give it a try at 145 pounds, he smoked the competition winning in just seven seconds with a hard right hook to his opponent’s jaw.

“I expected the fight to be a war, to last at least two of the three rounds,” said Karge, the new welterweight champion. “Knowing his fighting style, I knew one of us was going to get knocked out.”

Karge has only been fighting since June 2011, but he took on the challenge of fighting his opponent, Luke Warndahl, just to have the experience.

Karge, who in an interview with the Tribune in June stated he was excited and nervous about the fight, said the feeling he got when he won was unreal.

His sponsor, EP Empire, said carloads of people traveled from southern Minnesota and the surrounding areas to see the fight that was over before it began.

“I was sort of bummed it ended so fast because family and friends traveled so far, but they didn’t care,” Karge said. “They were just as amazed as I was.”