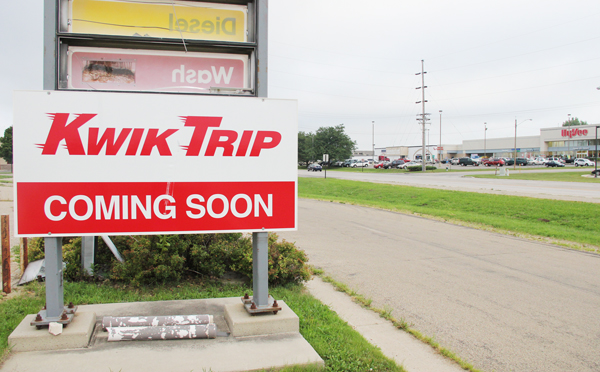 A sign tells motorists that a Kwik Trip is coming soon; however, “soon” could mean 2013 or possibly 2014, depending on whether Freeborn County leaders can resolve issues for Bridge Avenue. -- Danielle Boss/Albert Lea Tribune

Construction on the new $5 million Kwik Trip Inc. gas station on the north end of Bridge Avenue will not take place this year, according to a company official.

Kwik Trip Real Estate Development Manager Wade Dumond said Tuesday the earliest the new gas station will be built is 2013 — as long as questions about access points to the property are resolved. If the questions are not resolved, the project may be pushed back further.

The main question at hand is whether Freeborn County commissioners — as the road authority on Bridge Avenue — want to allow Kwik Trip to construct a right-turn lane for vehicles, mainly semis, to use to turn off Bridge Avenue into the property.

A street light may also be erected when warranted at the intersection of Bridge Avenue and Sykes Street.

Freeborn County Engineer Sue Miller said she and SRF Consulting Group out of Minneapolis, which has been studying the traffic patterns on the street, are recommending against the turning lane. The recommendation is in line with a past policy that recommends against new access points on Bridge Avenue.

Kwik Trip purchased the three-acre property at 2611 Bridge Ave. for $1.5 million in October and at that time announced plans to build a new convenience store. The store is slated to have both unleaded and diesel gasoline pumps, along with a car wash, and between 20 and 30 new jobs are expected to be created.

Commissioner Jim Nelson said the county should work to make sure that whatever happens is convenient for the company’s customers.

“If it’s not convenient they won’t come back,” he said.

Board Chairman Dan Belshan said he didn’t want the county to be a roadblock to getting the project started.

“It just seems to me, we are hindering this project,” Belshan said. “Something needs to be done.”

The discussion came Tuesday as commissioners and members of the Albert Lea City Council have been reviewing Bridge Avenue during the last several years. The street’s infrastructure needs to be replaced and officials are determining whether to make changes to the road.

Commissioners are expected to vote on the Kwik Trip turning lane Aug. 21. The lane would be paid for by Kwik Trip.