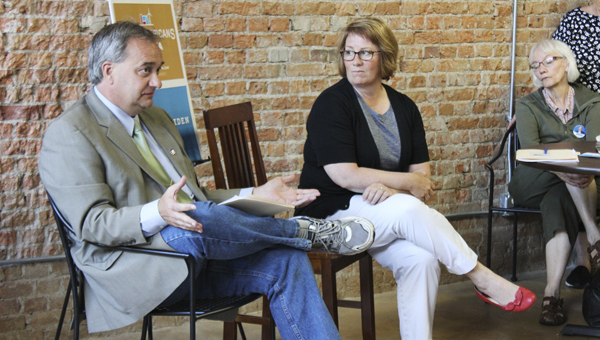 The presidential election is going to be decided in the Midwest. That is the message two state representatives had Monday on a tour of the region on behalf of the President Barack Obama re-election campaign.

He was joined at Prairie Wind Coffee in downtown Albert Lea by Rep. Erin Murphy, DFL-St. Paul, and about 40 people, most of whom stood. Both Murphy and Hansen are assistant minority leaders in the House. They brought with them an Obama campaign bus, albeit a short one. Called the Heartland Tour, it made stops in Mankato and Rochester on Monday.

Murphy said the selection by Republican presidential candidate Mitt Romney, a former governor of Massachusetts, of Congressman Paul Ryan of Wisconsin for his running mate has given voters “a clear choice.”

“It created quite a contrast for the country,” she said.

Hansen is a graduate of Freeborn High School and talked about getting his first pair of eyeglass as a child in the space now occupied by Prairie Wind Coffee. He cited getting shoes at Plymouth Shoe Store and seeing “Star Wars” in 1977 at the now-closed Broadway Theater.

He said Republicans want to take the country far back to the “social Darwinism” of the 1890s. “It will be the survival of the fittest economically.”

Murphy described how her father worked at a General Motors plant in Janesville, Wis., where Ryan is from. The plant is now closed. She said Ryan’s budget proposals would weaken the middle class and undermine the nation’s social safety net and public education.

Local author Joan Claire Graham told them that the Republicans often employ simple, effective messages in their advertising. She said the Democrats should be able to come up with message with equal appeal.

“We think people should just know,” she said.

Graham cited the Democrats not touting the benefits of the Affordable Care Act, which Republicans refer to as Obamacare.

“Why not list what Obama has accomplished? Check, check, check,” she said.

Albert Lea resident Carli Bailey said farmers often lean Republican, yet they welcome farm subsidies that keep them in business, even when crops fail. She said many farmers oppose programs like food stamps and assistance for the poor, yet they want their checks.

She said Democrats need to spell out that they were behind crop subsidies and want to maintain them.

Bailey also said immigrants from Latin America are the backbone of the country, just as they were when most immigrants came from Europe.

Murphy told people not to just wait for Democratic leaders to rebut issues in the national and regional debates.

“Give yourself permission to fight back and persuade others,” she said.