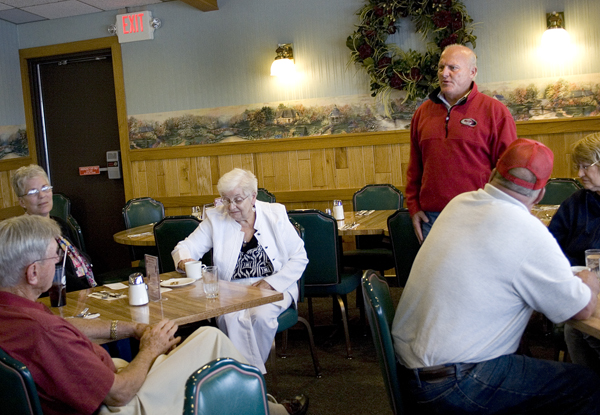 Stopping in Albert Lea Sunday on a whirlwind visit before the primary election, 1st Congressional District candidate Mike Parry said he’s confident he will win the Tuesday primary election, calling it simply “a bump in the road.”

Parry, a state senator from Waseca, faces off against former state Rep. Allen Quist of St. Peter. The winner of the election will be the Republican candidate to run against DFLer U.S. Rep. Tim Walz in November.

“I truly believe I’m the only one that can go nose to nose with Congressman Walz,” Parry said to a group of about 15 people at The Trumble’s Restaurant.

It has been a long campaign for the two Republicans, who have been battling for the position after neither won the party’s nomination.

Quist, who has campaigned on balancing the U.S. budget, was also making campaign stops at other parts of the district. He has said he thinks the country is headed toward “physical insolvency.”

Talking briefly about immigration, health care and the economy, Parry touted his background in Albert Lea while at the brief visit. He grew up on a dairy farm in Freeborn County.

He said he thinks the country needs a president who will enforce the laws of the land, including those on immigration. He also noted he thinks everyone who lives in the United should know English.

Parry said while there are probably some illegal immigrants who are paying taxes and contributing to society, he thinks if they are illegally in the country they need to pay the consequences.

Regarding the economy, he said he will work to keep more money in people’s wallets.

The country’s leaders also need to show the youth it’s OK to be a welder or to attend vocational school, instead of forcing youth into attending a four-year college, when they could better work in a different field, he added.

Parry said he is in favor of switching out Congressmen every six years and said he will work to repeal Obama’s health care plan.