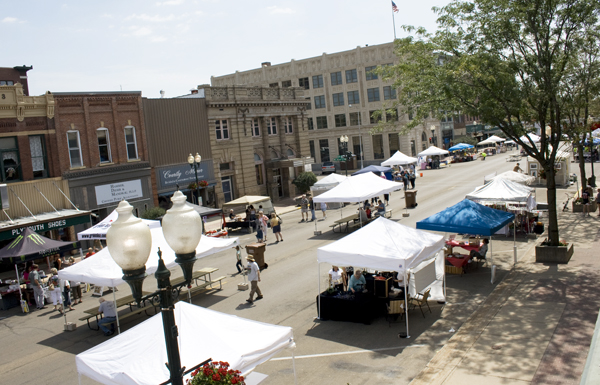 Area residents flocked to downtown Albert Lea Wednesday in what organizers are calling a successful Wind Down Wednesday.

A summer market and music festival, the event offered everything from food, drinks, live entertainment, and arts and crafts vendors.

It was the second time this summer for the event.

“I think it’s only going to get bigger and better,” said vendor Susan Bartley, who showcased her pottery and garden art.

It helped to have great weather. The high was 82 on Tuesday, with a gentle breeze. The first Wind Down Wednesday last month suffered from heat and humidity, then rain.

Designed after a weekly festival in Rochester called Thursdays on First, Wind Down Wednesday went from 11 a.m. to 8 p.m. on Broadway Avenue from Main Street to near Clark Street. All ages attended.

Bartley, who lives along Fountain Lake in Albert Lea, said she decided to participate in the festival after walking down to the one in July.

“It looked like it was fun, and it’s in my hometown,” she said. “I think Albert Lea is coming into its own. It’s coming back.”

Sarah Juntenen came to Wind Down Wednesday with her two children, one of who could be seen dancing in the street as bands performed on the Broadway stage.

“It’s much nicer to be able to do something in town rather than have to leave town,” Juntenen said. And to not have everything on the weekend is nice.”

During the noon hour people could be seen coming to check out the event on their lunch breaks. Organizer Tami

Staker said it was fun to see employees of Mayo Clinic Health System in Albert Lea and the Freeborn County Department of Human Services walk down to participate.

Organizer Susie Petersen, the executive director of the Albert Lea Convention and Visitors Bureau, said she and others want to continue the festivals in 2013, though they are unsure where they will be at this time because of construction taking place on Broadway Avenue.

She said organizers don’t want to break the momentum from the festivals this year by skipping a year until Broadway is completed.

Mother and daughter team Jeanne Hendrickson and Stephanie Hanson were at the festival with their business Hug-A-Bug Productions, which they started about eight months ago.

“It’s a good way to support community efforts and bring people to the downtown,” Hendrickson said.

Vendors included everything ranging from drawings and paintings, to photography, jewelry, texties, paper goods, sculptures and pottery. A jury reviewed all vendors to make sure their artwork or craft was 85 to 90 percent handmade.

There were also about a dozen food vendors selling everything from beverages and snow cones to burgers, tacos and chicken wings.

The Albert Lea City Council in May authorized alcohol to be served outdoors within the blocked off portion of the street. People drinking alcoholic beverages were given a cup with the Wind Down Wednesday logo on it to use.

They represented a variety of genres, including country, rock, blues, R&B, alternative and jazz.