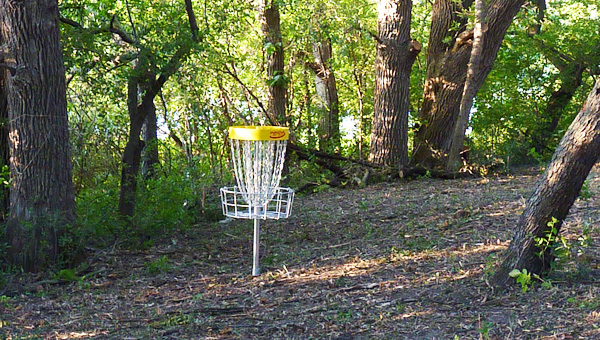 An Innova Discatcher disc golf basket for Hole 14 is in the woods on the north end of the island at Bancroft Bay Park. -- Dave Sime/for the Albert Lea Tribune

As work nears completion on the expanded disc golf course at Bancroft Bay Park, a group of Albert Lea residents is speaking out against the development.

During the Albert Lea City Council meeting Monday, the residents submitted a petition asking the city to remove the course and restore the park. The petition contained 317 signatures.

Residents who spoke out against the development of the Oak Island Disc Golf Course said the project has destroyed animal habitats and disrupted the natural setting of the park that was dedicated in the 1970s. Some questioned the process under which the expansion was approved, saying people did not know what was taking place, and others said it would be dangerous to have the course in a park where people also go for walks.

“I’m outraged,” said resident Debra Blowers. “I’m absolutely outraged that you could make that decision without looking at the history of that.”

Carol Bertelson, another resident who spoke out against the project, referred to a 1979 Tribune article that talked about the collaboration of the city with state and federal grants to turn the land from a mink farm to a natural setting.

She asked the council to rescind its April vote allowing the expansion and said it was not too late to move the already-installed disc golf baskets to land in the lower portion of Bancroft Bay Park, where another course exists.

“I am deeply disappointed and heartbroken to see the devastation of animal habitat,” resident Clemencia Gujral added.

The course was the brainchild of organizer Ross Brandt, a professional disc golfer who moved to Albert Lea a year ago and a student at Minnesota State University, Mankato. His plan called for removing the existing nine-hole course on the park’s peninsula and replacing it with an 18-hole course that challenges disc golfers with a layout that frequently uses wooded corridors and the water’s edge. The expansion, approved by the council in April, called for brush clearing to make way for expanded tee boxes, fairways and baskets.

City Manager Chad Adams said a majority of the clearing was of buckthorn, an invasive species, but it also included some other trees and vegetative removal. The project was completed mostly by volunteers without any city cost, other than staff oversight and high-level tree trimming.

He said after reviewing the work, staff are recommending that some areas need new vegetation and trees planted, and Brandt has agreed to a mitigation plan that would implement a shoreline buffer of native grasses and trees.

The concrete tee pads are slated to be installed Saturday.

Tim Engstrom, managing editor of the Tribune, started the Flying Lea Disc Golf Club in April 2009. He said he does not think the course displaces nature. Instead, he said, he thinks disc golf is a sport that brings people out to nature.

“I have experienced so much nature in my time playing disc golf out there,” Engstrom said, talking of eagles, deer and trumpeter swans.

Fifth Ward City Councilor Larry Anderson became upset with the opponents for voicing concerns Monday and not when the city was considering the project for six weeks in February, March and April. He chided them for being “leaders in the community” who don’t read City Council stories in the newspaper.

He said people who recall the founding of Myre-Big Island State Park couldn’t have imagined the man-made impacts out there today.

Brandt, who has been touring the country professionally for five years and is sponsored by Vibram and other companies, didn’t speak during the meeting but afterward thanked residents for bringing up their concerns and said many of them are being addressed.

He noted while “any opposition is discouraging,” he also knows there is not typically full support with any development.

He is working on a petition of his own in support of the project and as of Monday had 48 signatures. He is also still moving ahead with plans to bring the finals of the new Vibram Championship Series to the course.

Adams said the Minnesota Department of Natural Resources inspected the work for the project and found no violations.

He said from his research he has found that the park has been designated for passive outdoor recreation, and under the federal grant the city used to purchase the former mink farm, disc golf was found to be compatible with that purpose.

Opponents, however, say the park is still designated as being one that is “back to nature.”

Adams said the city will review the petition, but he did not think it would meet the requirements for a referendum.